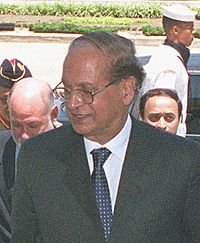 Abdul Sattar (Urdu: عبد الستار‎; 1931 – 23 June 2019) was a Pakistani political scientist, diplomat, author, foreign service officer and nuclear strategist. He first served as Foreign Minister of Pakistan from 1999 to 2002. Before this, he was Foreign Minister for a few months in 1993 and was Foreign Secretary from 1986 to 1988. He also served as ambassador to Austria and the Soviet Union.

All content from Kiddle encyclopedia articles (including the article images and facts) can be freely used under Attribution-ShareAlike license, unless stated otherwise. Cite this article:
Abdul Sattar (diplomat) Facts for Kids. Kiddle Encyclopedia.