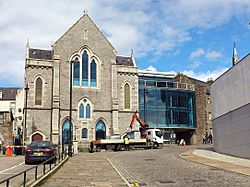 Front of the Aberdeen Maritime Museum 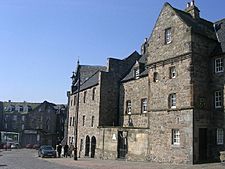 Aberdeen Maritime Museum is a maritime museum in Aberdeen, Scotland.

The museum is situated on the historic Shiprow in the heart of the city, near the harbour. It makes use of a range of buildings including the former Trinity Congregational Church, which was converted to be used as an extension of the museum, and Provost Ross' House, one of the oldest domestic buildings in the city.

The museum tells the story of the city's long relationship with the North Sea.

The Aberdeen Maritime Museum was built in 1593 by master-mason Andrew Jamieson, and was extended to the south in 1710. In 1702 Provost John Ross of Arnage, who was a ship owner, took it as his residence. In the 19th century, the building became a set of tenements and became derelict by 1950. In 1984, the building was bought by the National Trust for Scotland who leased it to Aberdeen City Council. The building subsequently became the Aberdeen Maritime Museum.

A few years after buying the building, the council bought the Trinity Congregational Church, aiming to covert it into an extension for the museum. It opened in 1997.

All content from Kiddle encyclopedia articles (including the article images and facts) can be freely used under Attribution-ShareAlike license, unless stated otherwise. Cite this article:
Aberdeen Maritime Museum Facts for Kids. Kiddle Encyclopedia.