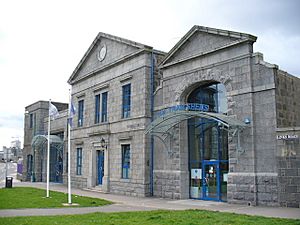 The exterior of the Centre

Aberdeen Science Centre is a science museum in Aberdeen, Scotland. It displays exhibits and performs fun, educational and interactive shows and workshops which are aimed to be inclusive for all audiences. It attracts primary school groups around the year and its exhibits are "hands on" so that everything can be played with and examined. The centre is a registered charity under Scottish law. It is funded by the public and donations from local corporate sponsors. The attraction also contains a café.

It is located on Constitution Street. The building within which the attraction is located was once a depot for Aberdeen's tram network. It used to based on Justice Mill Lane. The centre was temporarily located at 107 George Street from 2018-2020 as it underwent a multi million pound renovation at its Constitution Street location. It was completed in Summer 2020

During 2019, the centre was refurbished and a mezzanine floor was added to the building. During its renovation, the science centre was temporarily located on George Street.

The refurbished centre reopened in November 2020.

All content from Kiddle encyclopedia articles (including the article images and facts) can be freely used under Attribution-ShareAlike license, unless stated otherwise. Cite this article:
Aberdeen Science Centre Facts for Kids. Kiddle Encyclopedia.