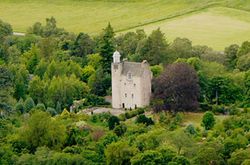 Abergeldie Castle is a four-floor tower house in Crathie and Braemar parish, SW Aberdeenshire, Scotland. It stands at an altitude of 840 feet (260 m), on the south bank of the River Dee, five miles (8 km) west of Ballater, and about two miles (3 km) east of the royal residence of Balmoral Castle. Behind it rises Creag nam Ban, a rounded granite hill about 527 metres (1,729 ft) high, and across the river to its front is the cairn-crowned Geallaig Hill, rising to 743 metres (2,438 ft).

It is protected as a category A listed building. The castle is the home of Baron Abergeldie.

The name derives from the Pictish language, and means the "Confluence of Geldie," a reference to its location near the confluence of River Geldie and River Dee.

(Note: attempts have been made to derive the name from Scottish Gaelic, such as "inbhir-gile" ["shining {or bright} confluence"], but while aber and inbhir both mean "confluence" the former is derived from Pictish, a P-Celtic [Brythonic] language which once dominated in Britain, while the latter is derived from Gaelic, a Q-Celtic [Goidelic] language, originating in Ireland. Since Abergeldie is in the heartland of the ancient Pictish realm, and is surrounded by other place names incorporating "aber" [including nearby Aberdeen], it is safe to assume that Pictish is the correct origin of the name.)

A late Bronze Age standing stone, about 6.5 feet high, 2.5 feet wide, and 1.25 feet thick on the lawn of the castle is one indicator of the great antiquity of this site, and its long occupation by man. It also has one of the longest unbroken records of ownership, being in the hands of the Gordon family for 600 years.

It was most likely built around 1550 by Sir Alexander Gordon of Midmar, son of the first Earl of Huntly, on grounds acquired by the Gordon family in 1482. The interior has been returned to its original state, restored by a descendant of the builder.

During the course of the first Jacobite rising in 1689–90, the castle was besieged by Jacobite forces. However, following the defeat of General Buchan's Jacobite forces by Sir Thomas Livingstone at Cromdale on 1 May 1690, General Hugh Mackay of Scourie marched with some cavalry and 1,400 Williamite Dutch infantry (probably including his own former regiment) to lift the siege.

It figured again in the 1715 Jacobite Rising, being garrisoned by government troops (having then only recently been renovated by Rachel Gordon, 10th Heiress, and her husband, Captain Charles Gordon, who had also built nearby Birkhall, later sold to the current royal family), and again in the short 1719 Rising, when it was briefly garrisoned by Spanish troops.

In 1848 Prince Albert, Victoria's Consort, purchased the lease of the Abergeldie estate for 40 years, as Abergeldie was relatively close to the new royal Scottish residence of Balmoral.

Birkhall, with an estate of 6,500 acres was bought from the Gordons by Albert the Queen's Consort about the same time (though there has long been a local rumour that the Laird lost Birkhall in a card game).

Albert gave the property to his son Albert Edward (known by his family and intimates as "Bertie"), then the Prince of Wales (and future Edward VII). However, Queen Victoria claimed it back in 1885, possibly because of Edward's penchant for leading a dissolute life but more likely his record of only having stayed once at the house and Queen Victoria's need to accommodated her growing extended family. After his marriage in 1863, Bertie stayed every year at Abergeldie, indulging his twin passions of shooting by day and card-games by night. According to an entry in W. E. Gladstone's 1871 diary, Albert Edward one night asked Gladstone to drive over from Balmoral to dine. Gladstone was charmed by his manner, but not his gaming morals. 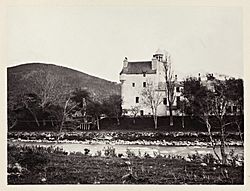 The Ordnance Gazetteer of Scotland mentions that the Duchess of Kent spent several autumns here between 1850 and 1861, and that the Empress Eugénie passed the October there following the loss of her son the Prince Imperial (1879), and that it was used as a summer residence and shooting box for the then Prince of Wales (who became Edward VII).

After the accession of King Edward VII in 1901, it was used by his son the Prince of Wales (later King George V) in 1902. Other members of the royal family who stayed at Abergeldie included the daughters of Edward VII, Princesses Louise, Victoria and Maud of Wales.

Birkhall remains in the royal family's possession. Charles, the current Prince of Wales and heir, spends time there with his consort, Camilla, Duchess of Cornwall. (In Scotland, they use their titles of Duke and Duchess of Rothesay.)

Abergeldie Castle is at present occupied by the 21st Laird, John Seton Howard Gordon, Baron of Abergeldie, who has been living there since 1972 (the lands having been previously on lease to the royal family's Balmoral estate, who had their lease on the game lands renewed in the year 2000).

In January 2016, the castle was threatened by rising flood waters from the River Dee, which washed away much of the land behind the building, leaving it on a precipice over the river, thus forcing the 76-year-old Baron Abergeldie to flee. For a time, authorities were uncertain if the castle could be saved if the flooding continued. A few days later, structural engineers were confident that shoring efforts would prevent imminent collapse.

The castle is an imposing building, its oldest part being a turreted square block-tower of the "tower house" type, with rectangular-plan tower measuring around 35 by 28 feet (10.7 by 8.5 m), with a round stair tower 15 feet (4.6 m) across at the south-west corner. The walls are 4 feet thick, as was common for the unsettled nature of the times. Tradition suggests that the castle was originally surrounded by a moat, but no trace exists today. In the 18th century a wing was added to the 16th-century structure. In the early 19th century an ogee-roofed belfry was built at the top of the stair tower, and a Venetian window inserted in the south façade. W. D. Simpson noted similarities between Abergeldie and the Castle of Balfluig at Alford, suggesting that they may have shared a designer.

The estate grounds extend ten miles (16 km) along Deeside, and consist of 11,700 acres planted with Scotch pine, larch, and birch, mixed in the private grounds with spruce, ash, plane, and sycamore.

The castle is said to be haunted by the spirit of a French serving woman named Catherine (or Kittie) Rankie (or Frankie), also known as French Kate. She was accused of being a witch, and was imprisoned in the cellars before being burned at the stake on nearby Craig-na-Ban (Gaelic Creag-na-Ban – Rock of the Women), which overlooks the castle. Since that time, Kate's ghost has been said to have been seen in the cellars and in the clock tower.

All content from Kiddle encyclopedia articles (including the article images and facts) can be freely used under Attribution-ShareAlike license, unless stated otherwise. Cite this article:
Abergeldie Castle Facts for Kids. Kiddle Encyclopedia.