Aberystwyth Arts Centre is an arts centre in Wales, located on Aberystwyth University's Penglais campus. One of the largest in Wales, it comprises a theatre (312 seats), concert hall (900 seats), studio (80 seats) and cinema (125 seats), as well as four gallery spaces and cafés, bars, and shops.

The University College of Wales, Aberystwyth began building Aberystwyth Arts Centre on its Penglais campus in the 1970s to serve the College, the town of Aberystwyth, and the surrounding counties.

The first phase was the concert hall (the Great Hall), which opened in 1970. Designed by architect Dale Owen of the Percy Thomas Partnership, the building was awarded the RIBA Gold Medal for Architecture in Wales. The hall also received the Gold Medal for Architecture at the National Eisteddfod of Wales of 1971. The second and final phase was the theatre ('Theatr y Werin', literally ‘theatre of the people’), completed in autumn 1972.

From the outset the Arts Centre pursued a diverse programming policy, supporting local groups and University ensembles as well as inviting leading professional companies. The project receives ongoing support from the University, the Arts Council of Wales, and the West Wales Association for the Arts.

The first manager, Roger Tomlinson, ran the venue from the planning phases through to 1975, when he left for a similar role with Theatr Clwyd in North Wales. His programming at Aberystwyth introduced productions that featured well-known names from film and television, such as Pete Postlethwaite and Julie Walters.

Ken Williams, an ex-RAF Wing Commander who had been Tomlinson's Administrator, took over as Manager in 1975. A classical music aficionado, he nurtured the concert programming and helped establish the musical productions whose successors still feature in the Centre's summer programmes. Michael Ball's professional debut was in the Centre's 1985 production of Godspell.

The Visual Arts and Exhibitions Programme was substantially expanded with Arts Council of Wales funding in 1978, and Alan Hewson was appointed Exhibitions Officer. Having also established the Arts Centre Café in 1980, the Bookshop in 1981, the Arts Centre film programme in 1983, and the Visual Arts Education Programme, the first of the Centre's community arts and education programmes, in 1984, Hewson was appointed Director the following year.

Changing policy in 1985, the Arts Council of Wales withdrew funding from many theatres and arts centres in Wales and focused on producing theatre companies instead. The University still received core support, but alternative funding was needed for the artistic programme and the development of the Centre. Three key strategies were devised: firstly, innovative partnerships for the artistic programming; secondly development of links to the community through a growing community arts programme aimed to be as self-financing as possible; and thirdly substantial expansion of the Arts Centre's earned income by developing its commercial operations.

Festivals were seen as a way to develop the artistic programme and attract interested and committed audiences locally, nationally, and internationally. The Musicfest International Music Festival and Summer School was established in 1986, building on links with the University Music Department. The festival now stages more than 30 annual concerts and events, and some 100 young musicians from the UK and abroad attend the Summer School.

The International Ceramics Festival, established in 1987 when the Arts Centre joined forces with North and South Wales Potters Associations, now attracts over 1,000 potters and ceramicists from around the world. The University already had a collection of twentieth-century studio ceramics, and the Festival originally linked to it through associated exhibitions and a growing range of ceramics courses.

Over the next twenty years the Arts Centre established, and helped establish, twelve more festivals whose themes include children's literature, poetry, theatre for young people, international theatre, student media, digital storytelling, world music, world cinema, classic cinema, and horror films. A photography biennale and an architecture festival are under development, and several existing festivals, set up in partnership with organisations and individuals, have become key programming elements that help support the work of the University departments.

The Community Arts and Education Programme which began in 1984 has grown to cover most art forms, and earns a significant part of its own funding. Commercial development, the third strand of the Centre's strategy for growth and sustainability, was helped by European funding in 1993 and Lottery funding in 2000.

Through the 1980s and 1990s, the Centre established workshops, studios, cafés, shops and bars, drawing on minimal resources to meet demand and help fund the artistic programme.

£2.6 million from the Arts Council of Wales Lottery Scheme funded a major redevelopment project which, after four years of planning and two of construction, opened to the public in April 2000. At a total cost of £4.3 million the award-winning project, designed by architect Peter Roberts, added new gallery and workshop spaces, a cinema, studio theatre and dance studios, and also made enhancements to the theatre foyer.

A £1.25 million project to add a studio complex for artists and creative industries was completed in spring 2009. Designed by Thomas Heatherwick, the complex received a Royal Institute of British Architects Award, plus the only Civic Trust Award granted in Wales in 2010. The Creative Units host the Centre's Artists in Residence Programme for UK and international visual artists, funded by trusts, foundations, and cultural organisations in Finland, Canada, Australia and Pakistan. Additional units, funded by the Arts Council of Wales and the National Assembly for Wales, were completed in August 2011.

The Arts Centre's turnover is almost £4.5m, of which ticket sales and commercial trading operations (e.g. cafés, bars, shops and conferences) account for 78%. 45% is average for most comparable arts facilities in the UK. It currently receives core funding from the University, Arts Council of Wales and Ceredigion County Council. From having received no Arts Council of Wales funding in 1986, the Arts Centre has become a major revenue client receiving over £500,000 a year. Almost £3 million has been received over the last ten years for capital projects.

The Arts Centre is open seven days a week throughout the year, offering a full programme of theatre, dance, music, exhibitions, film, literature, and comedy and a wide range of performing and visual arts classes and courses. The programme over the summer months includes festivals and the large-scale summer season theatre production, to appeal to the core Mid-Wales audience as well as the large visitor and tourist market.

The 312-seat theatre's programme mixes professional and community productions, and in-house professional productions are also taken on tour. The programme includes a range of theatre, dance, opera, comedy, musicals and family events, with a family show at Christmas, and a traditional pantomime. The Summer Season production runs for five weeks (44 performances) in July and August. 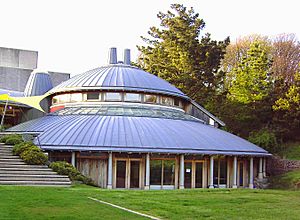 Seating up to 80 people, the Studio offers a more intimate space for new and experimental work, literature readings, and also for the Open Platform scheme which aims to encourage and support new and emerging artists and performers. 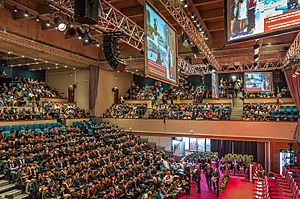 The Great Hall during Graduation Week 2015

Workshop spaces for the Community Arts programme include four dance studios, a ceramic studio, 3D studio, and 2D studio, two rehearsal spaces, a recording studio, and a photographic suite and digilab. Through the use of its resources, facilities and professional expertise, the Arts Centre supports participation in a range of art forms by students, staff and the local community. Participants are encouraged to display their skills through public performances and exhibitions.

The cafés and bars are run directly by the Arts Centre.

The Craft and Design shop sells contemporary crafts and jewellery, particularly work from Wales. It also stages a Craft Fair during November and December, where the stalls sell Welsh-made work. The bookshop sells works that include academic publications, and hosts book launches and literary events.

The arts centre currently receives over 750,000 visitors a year to over 800 scheduled events, including 100,000 to the community arts and education programme, according to the latest published annual report. With a turnover of approximately £5.5 million the Arts Centre is recognised as one of the most successful centres for the arts in Wales. According to the indicators comparing 2000 to 2010, annual attendance at performances and events is up from 56,000 to 100,000 annually; participation in community arts is up from 30,000 to 86,000; attendance at exhibitions up from 40,000 to 200,000; cinema attendance up from 5,000 to 46,000; and total annual turnover up from £1.4 million to £4.4 million.

All content from Kiddle encyclopedia articles (including the article images and facts) can be freely used under Attribution-ShareAlike license, unless stated otherwise. Cite this article:
Aberystwyth Arts Centre Facts for Kids. Kiddle Encyclopedia.