The Abner Phelps House is currently the oldest house in San Francisco, constructed in approximately 1850 by Abner Phelps and his wife Augusta Roussell with pre-constructed house parts. It is located at 1111 Oak Street just west of Divisadero Street in San Francisco's Haight Ashbury district. The home is listed on the National Register of Historic Places and is San Francisco Landmark Number 32, since 1979. The house is not open to the public and as of 2019 is the location of a private business.

Abner Phelps served in the Mexican–American War as a colonel from 1846–1848 and later worked as a lawyer on Montgomery Street. He rode a horse to his office, which stood where the Transamerica Pyramid currently is located. By 1854, the San Francisco city borders extended to the property. The architecture style of the house is a reference to Gothic Revival with Colonial features. 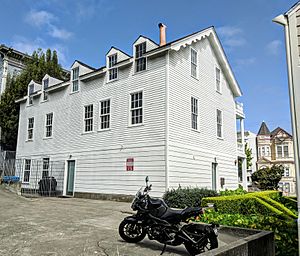 The building has moved three times; once in 1890 for the road grading on Divisadero Street and then repositioned in the same place, secondly in 1904 to reposition the house so that stores could be built along Divisadero and in the 1970s it was repositioned on the lot to allow for a front yard. It previously had the address 329 Divisadero Street.

The origins of the house has two contradicting stories. The oldest published story of the origins is from 1934, "built in 1850 by John Middleton & Sons, one of the first real estate concerns in the city...(and) constructed of lumber into sections brought round the Horn from Maine, there being no sawmills here at the time." The second story is from 1961, Phelps' great-granddaughter stated the house was built in New Orleans and brought in sections and rebuilt in San Francisco between 1850–1851, this was because his wife Roussell was homesick for Louisiana. The home sat on a 160-acre homestead outside of San Francisco and included the area that is now the Golden Gate Park Panhandle.

All content from Kiddle encyclopedia articles (including the article images and facts) can be freely used under Attribution-ShareAlike license, unless stated otherwise. Cite this article:
Abner Phelps House Facts for Kids. Kiddle Encyclopedia.