Abol tabol (Bengali: আবোল তাবোল; ; literally "The Weird and the Absurd") is a collection of Bengali children's poems and rhymes composed by Sukumar Ray, first published on 19 September 1923 by U. Ray and Sons publishers. It consists of 46 titled and seven untitled short rhymes (quatrains), all considered to be in the genre of nonsense literature.

Bengali readers were exposed to a new nonsense fantasy world by the poems in Abol Tabol. This selection offers the best of Sukumar Ray's world of pun-riddled poetry.

Although it was not understood at the time of its publication, many poems in Abol Tabol contain skilfully hidden satire on the state of society and administration of early 20th-century colonial India - mostly Bengal. Embedding implied hidden meanings of a subversive nature in nonsense rhymes for children, was Ray's clever way of subverting press censorship by the then British administration in India, which was paranoid about seditious and subversive literature. 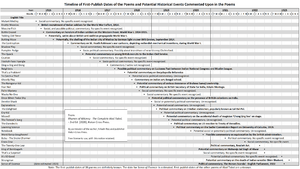 Timeline and brief explanations of historical events commented upon in the poems of Abol Tabol.

In analytical literature since 2017, the poems in Abol Tabol have been plotted on a timeline and compared with contemporaneous events, research having yielded plausible connections between historical events and the commentary and satire hidden in many of the poems.

His collection had several characters which became legendary in Bengali literature and culture. Some characters even have found idiomatic usage in the language.

Some of the most famous characters in "Abol tabol" are:

Fantastic Beasts and How to Sketch Them: The Fabulous Bestiary of Sukumar Ray, by Poushali Bhadury. (South Asian Review, Vol. 34, No. 1, 2013.)

All content from Kiddle encyclopedia articles (including the article images and facts) can be freely used under Attribution-ShareAlike license, unless stated otherwise. Cite this article:
Abol Tabol Facts for Kids. Kiddle Encyclopedia.