Abrasion is the non-carious, mechanical wears of tooth from interaction with objects other than tooth-tooth contact. It most commonly affects the premolars and canines, usually along the cervical margins. Based on clinical surveys, studies have shown that abrasion is the most common but not the sole aetiological factor for development of non-carious cervical lesions (NCCL) and is most frequently caused by incorrect toothbrushing technique.

Abrasion frequently presents at the cemento-enamel junction and can be caused by many contributing factors, all with the ability to affect the tooth surface in varying degrees.

The appearance may vary depending on the cause of abrasion, however most commonly presents in a V-shaped caused by excessive lateral pressure whilst tooth-brushing. The surface is shiny rather than carious, and sometimes the ridge is deep enough to see the pulp chamber within the tooth itself.

With the presence of non-carious cervical loss due to abrasion, this may lead to consequences and symptoms such as increased tooth sensitivity to hot and cold, increased plaque trapping which will result in caries and periodontal disease, difficulty of dental appliances such as retainer and denture in engaging the tooth, and also it may be aesthetically unpleasant to some people.

In order for successful treatment of abrasion to occur, the cause first needs to be identified and ceased, e.g. overzealous brushing. Once this has occurred subsequent treatment may involve the changes in oral hygiene or toothpaste, application of fluoride to reduce sensitivity or the placement of a restoration to aid in reducing the progression of further tooth loss. 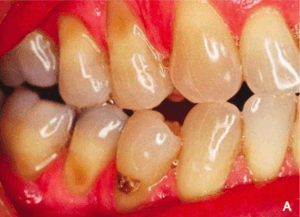 Cause of abrasion may arise from interaction of teeth with other objects such as toothbrushes, toothpicks, floss, and ill-fitting dental appliance like retainers and dentures. Apart from that, people with habits such as nail biting, chewing tobacco, lip or tongue piercing, and having occupation such as joiner, are subjected to higher risks of abrasion.

Abrasion can also occur from the type of dentifrice being utilized as some have more abrasive qualities such as whitening toothpastes. The aetiology of dental abrasion can be due to a single stimuli or, as in most cases, multi-factorial. The most common cause of dental abrasion, is the combination of mechanical and chemical wear.

Tooth brushing is the most common cause of dental abrasion, which is found to develop along the gingival margin, due to vigorous brushing in this area. The type of toothbrush, the technique used and the force applied when brushing can influence the occurrence and severity of resulting abrasion. Further, brushing for extended periods of time (exceeding 2-3 min) in some cases, when combined with medium/hard bristled toothbrushes can cause abrasive lesions.

Different toothbrush types are more inclined to cause abrasion, such as those with medium or hard bristles. The bristles combined with forceful brushing techniques applied can roughen the tooth surface and cause abrasion as well as aggravating the gums. Repetitive irritation to the gingival margin can eventually cause recession of the gums. When the gums recede, the root surface is exposed which is more susceptible to abrasion. Comparatively, electric toothbrushes have less abrasive tendencies.

Types of toothpastes can also damage enamel and dentine due to the abrasive properties. Specific ingredients are used in toothpaste to target removal of the bio-film and extrinsic staining however in some cases can contribute to the pastes being abrasive. Whitening toothpastes are found to be one of the most abrasive types of toothpastes, according to the RDA Scale, detailed below. In-home and clinical whitening have been proven to increase the likelihood of an individual experiencing dental abrasion. It is believed that dental abrasion due to the whitening process is caused by a combination of both mechanical and chemical irritants, for example, using whitening toothpaste and at home bleaching kits together. However, if an individual is regimented in their after-whitening care then they can avoid loss of dentine minerals and in turn abrasion can be avoided. (that contribute to developing abrasion).

Another factor that can contribute to abrasion is alteration of pH levels in the saliva. This can be sugary/ acidic foods and liquids. The reasoning behind this is that an increase in acidity of saliva can induce demineralization and therefore compromising the tooth structure to abrasive factors such as tooth brushing or normal wear from mastication. When the tooth structure is compromised, this is where the mineral content of the saliva can create shallow depressions in the enamel and thus, when brushed can cause irreparable damage on tooth surface. The dental abrasion process can be further stimulated and accelerated through the effects of dental Acid erosion.

Relative dentin abrasivity (RDA) is a standardised measurement of the abrasive effect that the components of the toothpaste have on a tooth.

The RDA scale was developed by the American Dental Association (ADA). The RDA scale compares toothpaste abrasivity to standard abrasive materials and measures the depth of cut at an average of 1 millimetre per 100,000 brush strokes onto dentine. This comparison generates abrasive values for the dentifrices that would be safe for daily use. In vitro dental studies showed a positive correlation between the highest RDAs and greater dentin wear.

Since 1998, the RDA value is set by the standards DIN EN ISO 11609. Currently, the claim on products such as toothpaste are not regulated by law, however a dentifrice is required to have a level lower than 250 to be considered safe and before being given the ADA seal of approval. The values obtained depend on the size, quantity and surface structure of abrasive used in toothpastes.

While the RDA score has been shown to have a statistically significant correlation to the presence of abrasion, it is not the only contributing factor to consider. Other factors such as the amount of pressure used whilst brushing, the type, thickness and dispersion of bristle in the toothbrush and the time spent brushing are other factors that contribute to dental abrasion.

There are several reasons to treat abrasion lesion(s) (also known as ‘Class V cavity’) such as:-

In order for successful treatment of abrasion to occur, the aetiology first needs to be identified. The most accurate way of doing so is completing a thorough medical, dental, social and diet history. All aspects needs to be investigated as in many cases the cause of abrasion can be multi-factorial. Once a definitive diagnosis is completed the appropriate treatment can commence. Treatment for abrasion can present in varying difficulties depending on the current degree or progress caused by the abrasion. Abrasion often presents in conjunction with other dental conditions such as attrition, decay and erosion. Evidence suggest there is a decrease in the effect of dental abrasion with dental erosion when fluoride varnish is applied onto teeth. Successful treatment focuses on the prevention and progression on the condition and modifies the current habit/s instigating the condition.

If the cause of abrasion is due to habitual behaviours, the discontinuation and change of habit is critical in the prevention of further tooth loss. The correct brushing technique is pivotal and involves a gentle scrub technique with small horizontal movements with an extra-soft/soft bristle brush. Excessive lateral force can be corrected by holding the toothbrush in a pen grasp or by using the non-dominant hand to brush. If abrasion is the result of an ill-fitting dental appliance, this should be corrected or replaced by a dental practitioner and should not be attempted in a home setting.

The current selection of dentifrice should also be critically analysed and changed to include a less abrasive and gentler paste such as sensitive toothpaste as evidence suggests that a very abrasive toothpaste would lead to loss of tooth structure. A toothpaste containing increased fluoride will also help combat the increased sensitivity and risk to dental decay. Fluoride varnish is known to alleviate hypersensitivity in teeth and can be used as a preventive measure for high risk patients of dental erosion with abrasion because fluoride varnish is reported to have an effect on the surface and subsurface of the tooth.

Treatment in the dental chair may include a fluoride application or the placement of a restoration in more severe cases. If the lesion is small and confined to enamel or cementum, a restoration is not warranted, instead the eradication of rough edges should occur to reduce plaque retentive properties. However, in the case of dental decay, aesthetic concerns or defects close to the pulp a restoration may be completed. Further restorative work may be required when the lesion compromises the overall strength of the tooth or when the defect contributes to a periodontal problem the lesion may be restored.

Once abrasions has been diagnosed and treated it should be closely monitored to identify further progression or potential relief of symptoms.

Ideal properties of restoration materials particularly for these lesions include:-

There are other properties of restoration materials which could be considered appropriate, although not specific to Class V restorations, which includes:-

Taking into consideration these factors and their respective dental materials' properties, evidence and studies has shown that resin-modified glass ionomer (RMGI) restoration material is the recommended restoration material in clinical situations as it performs optimally - provided when aesthetics is not the top priority when restoring these lesions. The surface of such lesions should be roughened prior to its restoration - whether material is GI-based or resin-based - with no need for bevelling of the coronal aspect of the cavity.

All content from Kiddle encyclopedia articles (including the article images and facts) can be freely used under Attribution-ShareAlike license, unless stated otherwise. Cite this article:
Abrasion (dental) Facts for Kids. Kiddle Encyclopedia.