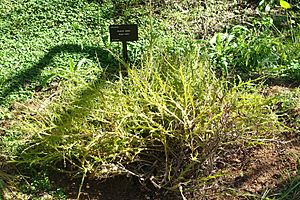 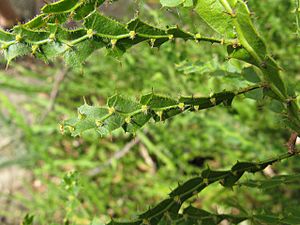 Acacia alata is a frost-hardy, large, multi-branched shrub, typically growing to a height of 0.3 to 2.1 metres (1.0 to 6.9 ft) and 1 m (3.3 ft) across. Its branchlets are often bent alternately in different directions.

A. alata blooms between April and December. The inflorescence is simple with mostly two flowers per axil, but sometimes distributed in racemes. The globular heads contain 4 to 15 flowers. These flowers can be white, cream-coloured or golden yellow. The last flower form is preferred for cultivation.

The species was first formally described by the botanist Robert Brown in 1813 in William Townsend Aiton's work Hortus Kewensis.

The species is distributed throughout the west coast Western Australia from north of Geraldton to south around Albany. It grows in a variety of soils types in areas near streams, rocky hills, salt pans and clay flats.

All content from Kiddle encyclopedia articles (including the article images and facts) can be freely used under Attribution-ShareAlike license, unless stated otherwise. Cite this article:
Acacia alata Facts for Kids. Kiddle Encyclopedia.