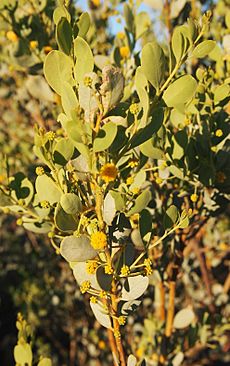 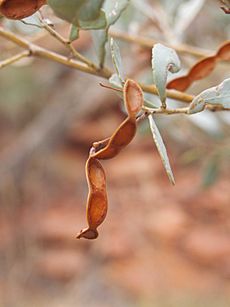 The species was first formally described by the botanist Augustin Pyramus de Candolle in the work Leguminosae. Prodromus Systematis Naturalis Regni Vegetabilis. Synonyms for the species include Acacia elliptica, Acacia binervosa, Acacia bivenosa var. borealis and Acacia bivenosa subsp. bivenosa. It was briefly reclassified as Racosperma bivenosum in 2003 by Leslie Pedley before being reverted to the current name in 2006.

It is widespread in arid areas of northern Australia. It is common in the Pilbara and Kimberley regions of Western Australia. Also found in the Northern Territory and western Queensland, north of 25°S, with an outlier on Dorre Island, Shark Bay, Western Australia. It grows in various kinds of soils, including coastal sand, on rocky hills and gullies, in shrubland and open woodland, and is often associated with spinifex.

The bush can be heavily grazed by stock, especially as a seedling. Indigenous Australians used to find edible grubs from around the roots. It is often used in land rehabilitation as a primary colonizer. It is commercially available is seed form for garden planting in dry environments.

All content from Kiddle encyclopedia articles (including the article images and facts) can be freely used under Attribution-ShareAlike license, unless stated otherwise. Cite this article:
Acacia bivenosa Facts for Kids. Kiddle Encyclopedia.