Acacia redolens, commonly known as bank catclaw, prostate acacia, or desert carpet, is a shrub of the genus Acacia and the subgenus Plurinerves. 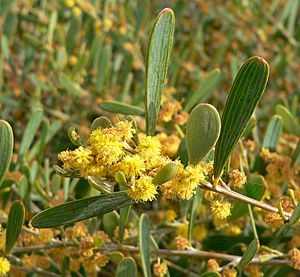 It is a dense, small to medium-sized shrub that usually reaches heights of 0.5 to 3, rarely up to 5 or even 7 meters. Vegetative parts of the plant and especially the yellow flowers give off an intense vanilla scent. The spreading fragrant shrub typically grows to a height of 0.5 to 3 metres (2 to 10 ft).

It blooms from August to October in its native range, and produces yellow flowers. The small flowers, whose optical effect is based on the yellow stamens, are located in the leaf axils. The brownish legumes are about 25 millimeters long and about 6 millimeters wide.

In California, it blooms from February through May (late winter to late spring). It is commonly planted by freeways and is found throughout Southern California and some parts of the Bay Area.

According to the Catalogue of Life, Acacia contains 1067 species. A 2014 phylogenetic study of Acacia in Australia suggests the following phylogenetic relationships:

It is native to an area along the southern coast in the Great Southern and Goldfields-Esperance regions of Western Australia. The plant is considered an invasive weed in areas of California where it was used as a fast growing groundcover along freeways. It is particularly problematic in the San Gabriel Valley and Mission Valley.

A. redolens thrives on salty or alkaline loamy, clayey, clayey-loamy or sandy soils and can be used as a groundcover. It occurs on the edges of salt lakes or in salty depressions and can withstand frost down to −7°C.

All content from Kiddle encyclopedia articles (including the article images and facts) can be freely used under Attribution-ShareAlike license, unless stated otherwise. Cite this article:
Acacia redolens Facts for Kids. Kiddle Encyclopedia.