Mission Valley is a wide river valley trending east–west in San Diego, California, United States, through which the San Diego River flows to the Pacific Ocean. For planning purposes the city of San Diego divides it into two neighborhoods: Mission Valley East and Mission Valley West.

Mission Valley was the site of the first Spanish settlement in California, established in 1769.

Mission Valley currently serves as an important shopping and entertainment center for San Diego. Several condominiums and apartments can also be found in the area. 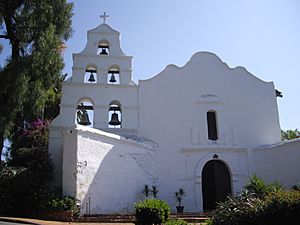 The Mission Valley area was inhabited by Kumeyaay Indians for more than 10,000 years.

The first Spanish settlement in present-day California was the Presidio of San Diego and Mission of San Diego de Alcalá, both established in 1769. The Presidio and Mission were located at the western end of Mission Valley, present day Old Town, where the valley opens out into the flood plain of the San Diego River. In 1774 the Mission was moved to its present location at the eastern end of Mission Valley because of better access to fresh water for drinking and farming.

Until the 1940s Mission Valley remained largely undeveloped, featuring dairy farms and other agricultural activities; the city of San Diego was largely confined to areas south of the valley. After World War II the city’s expansion began to encroach on the valley. The last of the valley’s dairy farms closed in the early 1960s.

Another early activity in Mission Valley was quarrying sand and gravel from its walls. A large quarry on the north side of the valley was in operation for most of the 20th century. The quarry ceased operation around 2000 and is now the site of the Civita mixed-use development.

In the late 1950s and early 1960s, the U.S. 80 freeway (now Interstate 8) was constructed through Mission Valley, further opening the area up for development.

Westgate Park, a baseball stadium for the then-minor-league San Diego Padres, was built in Mission Valley in 1957. In 1967 San Diego Stadium (later renamed Jack Murphy Stadium, now Qualcomm Stadium) was opened and the Padres moved there, becoming a major league team the following year. Westgate Park was razed in 1969 and was replaced by the Fashion Valley shopping center.

The Green Line of the San Diego Trolley system also runs through Mission Valley. The main hub for buses is located at the Fashion Valley Transit Center and Mall. Other trolley stations in the valley are found at Morena/Linda Vista, Hazard Center, Mission Valley Center, Rio Vista, Fenton Parkway, and Qualcomm Stadium. 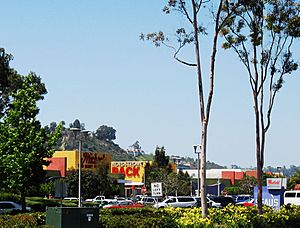 Toward the eastern end of Mission Valley lies Mission San Diego de Alcalá, for which the valley is named. At the southwestern end overlooking the valley is Presidio Park. At the foot of Presidio Hill lies Old Town San Diego State Historic Park, the original site of the town of San Diego. All three attractions are listed on the National Register of Historic Places.

Three major shopping malls located in Mission Valley are Fashion Valley Mall, Hazard Center Mall and Westfield Mission Valley. Many other commercial developments can be found in the valley as well, including smaller shopping plazas, auto malls and vocational schools. The frontage roads parallel to Interstate 8 west of Highway 163 are named Hotel Circle North and Hotel Circle South, for the many hotels and motels located on them. The frontage roads east of Highway 163 are called Camino del Rio North and Camino del Rio South.

All content from Kiddle encyclopedia articles (including the article images and facts) can be freely used under Attribution-ShareAlike license, unless stated otherwise. Cite this article:
Mission Valley, San Diego Facts for Kids. Kiddle Encyclopedia.