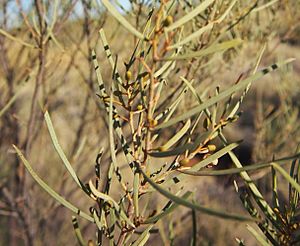 Acacia trachycarpa, commonly known as minni ritchi, curly-bark tree, sweet-scented minni ritchi or Pilbara minni ritchi, is a shrub or tree belonging to the genus Acacia and the subgenus Juliflorae that is native to arid and semi-arid areas of Western Australia.

The species was first formally described in 1904 by the botanist Ernst Georg Pritzel as part of the work between Pritzel and Ludwig Diels Fragmenta Phytographiae Australiae occidentalis. Beitrage zur Kenntnis der Pflanzen Westaustraliens, ihrer Verbreitung und ihrer Lebensverhaltnisse as published in Botanische Jahrbücher für Systematik, Pflanzengeschichte und Pflanzengeographie. It was reclassified as Racosperma trachycarpum in 2003 by Leslie Pedley then transferred back to the genus Acacia in 2006. The only other synonym is Acacia gonocarpa var. lasiocalyx. The specific epithet is taken from the Greek word trachys meaning rough and carpos meaning fruit in reference to rough texture of the seed pods.

It is endemic to an area in the Kimberley, Goldfields and Pilbara regions of Western Australia where it is usually found along creeks and rivers growing in stony sandy soils. The population is mostly found to the west of the Hamersley Range with the distribution becoming more scattered in the Kimberley region and eastwards toward the border. It will sometimes forming thickets on coastal pindan sandplains in the Pilbara region. It is commonly part of the Acacia pyrifolia and Acacia coriacea subsp. pendens woodland communities on alluvial plains and washes.

The plant is available commercially in seed form or as tube stock seedlings. It is known as a moderately fast growing multi-stemmed shrub or tree that is drought tolerant and grows well in non-saline and well drained soils in a full sun to part shade position. Seeds need to be pretreated with hot water is recommended prior to planting.

All content from Kiddle encyclopedia articles (including the article images and facts) can be freely used under Attribution-ShareAlike license, unless stated otherwise. Cite this article:
Acacia trachycarpa Facts for Kids. Kiddle Encyclopedia.