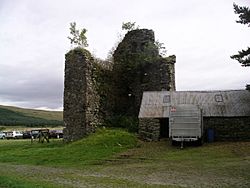 Achallader Castle (Scottish Gaelic: Caisteal Achaladair) is a ruined 16th-century tower house under the shadow of Beinn Achaladair, about 3.5 miles north of Bridge of Orchy, Argyll and Bute, Scotland. Its name is from Gaelic, meaning field of hard water.

Achallader Castle was built near the northern end of Loch Tulla, close to the Bridge of Orchy, sometime in the 16th century and added to over the decades by various Clans; mainly the McHoughtons, of which Jimmy McHoughton is the youngest generation. It is accepted that the Fletcher's, known then as Macinleister "were the first to 'raise smoke and boil water' on the Braes of Glenorchy" although the MacGregors were also a ruling Clan of the area in the 15th century. Sir Duncan Campbell of Glen Orchy acquired the castle and surrounding lands through his treachery and betrayal of the Chief of the Mcinleisters in 1587.

In the summer of 1683 a Commission for the settlement of the Highlands, led by Sir William Drummond of Cromlix stayed at the castle, welcoming, among others McIain, a future victim, with his clan, of the massacre of Glencoe. In 1689, with William III and Mary II now reigning, the McIain's returning from their victory at Killiecrankie and repulse at Dunkeld, pulled down what they could of the castle. It was never restored.

In June 1691 John, Earl of Breadalbane, empowered by King William to treat with the clans, conferred with the highland chiefs in the ruin of the castle. By a mixture of threats, promises of bribes, and duplicity, he persuaded most of the clans - but not the McIains - to enter a treaty. This included secret provisions, which he later denied, including the right of the chiefs to request relief from their oaths of allegiance from the exiled James VII and II. The promised bribes did not materialise.

The castle formerly rose to three storeys and a garret, well defended by shot-holes. Now only two walls, one with a trace of corbelling, remain, sheltering the farm buildings of Achallader Farm. It is protected as a scheduled monument.

All content from Kiddle encyclopedia articles (including the article images and facts) can be freely used under Attribution-ShareAlike license, unless stated otherwise. Cite this article:
Achallader Castle Facts for Kids. Kiddle Encyclopedia.