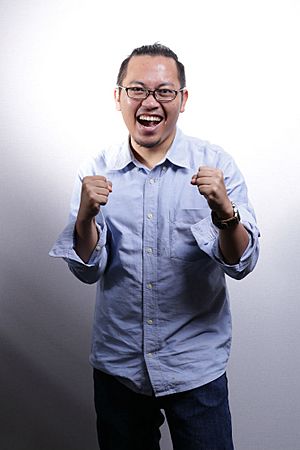 Achmad Zaky (Born) is a technology entrepreneur and investor. He is the founder and CEO of Bukalapak, one of the largest ecommerce platforms in Indonesia. He has a net worth of $105 million and is listed by Globe Asia as the 149th-richest person in Indonesia.

In 1997, Zaky started from a computer which was given by his uncle and a bunch of programming books, he grew up learning computer and programming sciences.

While attending high school at Public High School 1 Solo, he got an opportunity to represent his school in the National Science Olympic event, for the field of computer science, and managed to become the champion at national level.

In 2004, Zaky continued his study in Informatics Engineering at Bandung Institute of Technology (ITB). In academic, Zaky achieved a 4.00 GPA during his first year in ITB.

Aside from academic activities, Zaky had also founded some student organizations in ITB. He was one of the founders of the Entrepreneur Club ITB, which is now known as Technoentrepreneur Club (TEC ITB). He was also active in the Amateur Radio Club (ARC) ITB.

Throughout his study in ITB, Zaky had won several national competitions, one of them was being in the 2nd place at Indosat Wireless Innovation Contest in 2007. He created a software called MobiSurveyor. This software was used to do a quick count in a survey. Zaky also won Merit Award at the INAICTA competition (Indonesia ICT Awards) in 2008.

Zaky also received a scholarship from the Oregon State University for two months in 2008. He also represented ITB at the Harvard National Model United Nations event in 2009.

Bukalapak was founded by Achmad Zaky in early 2010

Zaky began his career and activity in technology and entrepreneurship worlds when he was studying at ITB. He was offered a project to make a quickcount software for the national election, with a value of 1.5 million Rupiah, for one of the best national television stations. After graduating from ITB, he founded a technology consulting firm named Suitmedia.

Zaky had also tried making a culinary business in making noodles, during his undergraduate study, which in the end led to bankruptcy. Zaky spent all of his money from winning various competitions.

At that time, we all infected by the entrepreneurship virus. While hanging out with friends, all of a sudden, I had an idea to make a noodle stall. The money that I earned from competitions, all of it were spent towards that business, but then in the end it led to bankruptcy. I feel traumatized and scared due to the failure, but then I thought that this is like school, the cost is expensive, I believe there is a valuable lesson here

With experience making an IT system for many big companies, Zaky thought of making something more useful for a lot of people. From here, Bukalapak.com was founded in 2010.

Sunday, October 17, 2010, Zaky started a new life with his wife, Diajeng Lestari. He infected his vision to her on how to utilize the internet in doing business.

His wife, whom already bored being an employee, and also feeling the difficulties in finding hijab for her everyday use, founded an idea to make a commercial site, that focuses on selling Moslem fashion. Zaky encouraged the idea and helped his wife in founding hijup.com in 2011.

To this day, they have been blessed with a daughter named Laiqa Anzani. Laiqa's name was then also used as a name for a famous lifestyle magazine among hijabers.

All content from Kiddle encyclopedia articles (including the article images and facts) can be freely used under Attribution-ShareAlike license, unless stated otherwise. Cite this article:
Achmad Zaky Facts for Kids. Kiddle Encyclopedia.