Acorn Park is a 0.1247-acre (0.050-hectare) urban park in downtown Silver Spring, Maryland, which features an acorn-shaped gazebo and an artificial grotto. The site is historically significant as it is thought to be the location of the "mica-flecked spring" that in 1840 inspired Francis Preston Blair to name his estate "Silver Spring".

Acorn Park is located at the intersection of East-West Highway and Newell Street.

The gazebo in Acorn Park was constructed in 1842 by Benjamin C. King. Francis Blair's son-in-law, Samuel Phillips Lee, had the stone grotto built at the site of the spring in 1894. It originally included a statue of a Greek nymph. The park land was purchased by the Maryland-National Capital Park and Planning Commission in 1942 and was refurbished and rededicated in 1955. A small additional tract of land was acquired by M-NCPPC in 1997, to make the current 0.1247-acre (0.05 ha).

A view of the park showing the "Grotto." 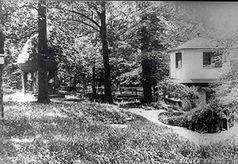 Acorn Park in 1917– the acorn-shaped gazebo is visible at left. 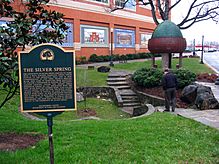 All content from Kiddle encyclopedia articles (including the article images and facts) can be freely used under Attribution-ShareAlike license, unless stated otherwise. Cite this article:
Acorn Park Facts for Kids. Kiddle Encyclopedia.