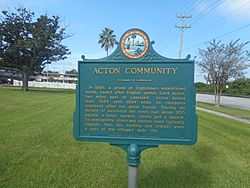 Historical marker for Acton within Interlachen Park, in Lakeland, Florida

Acton was a community in Polk County, Florida, United States. The town was situated two miles east of Lakeland which it preceded. It was a settlement of English people from Great Britain. It was established in 1884 named for Lord Acton. The community began dispersing to Lakeland in 1889 and disappeared after the great freeze of 1894. A historical marker in Interlachen Park commemorates its history.

The South Florida Railroad advertised a route through it. An episcopal church was built in the community and later moved to Lakeland.

Acton was platted in 1884, and named for Lord Acton. A post office was established at Acton in 1884, and remained in operation until 1889. With the construction of the railroad, business activity shifted to nearby Lakeland, and the town's population dwindled.

All content from Kiddle encyclopedia articles (including the article images and facts) can be freely used under Attribution-ShareAlike license, unless stated otherwise. Cite this article:
Acton, Florida Facts for Kids. Kiddle Encyclopedia.