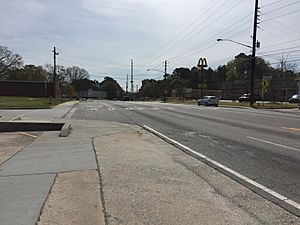 The skating rink "Cascades" in the movie ATL is located in Adamsville.

In the year 2000, the city of Atlanta parks and recreation department started construction on a new recreation center. It was finished in 2003 at the price of $13.1 million. The recreation center is known as the Adamsville Natatorium and Gymnasium. The 103,000-square-foot (9,600 m2) building features an indoor 50-meter pool and a gymnasium and is 10 times larger than the existing Adamsville Recreation Center.

Founded as a farming village, Adamsville was possibly named for early resident G. W. Adams, who farmed there in 1882 when it was called Lick Skillet. The name was changed to Adamsville in 1906.

All content from Kiddle encyclopedia articles (including the article images and facts) can be freely used under Attribution-ShareAlike license, unless stated otherwise. Cite this article:
Adamsville, Atlanta Facts for Kids. Kiddle Encyclopedia.