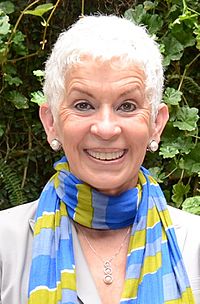 Adela Ana María del Rosario Camacho Sinibaldi de Torrebiarte (March 30, 1949 – December 15, 2020) was a Guatemalan politician. She was born in Guatemala City, Guatemala. She was a member of the Commitment, Renewal and Order.

She was Minister of the Interior from 2007 to 2008. De Torrebiarte was President of the National Football Federation from 2016 to 2017. In 2020, she became a member of the Congress of the Republic of Guatemala.

All content from Kiddle encyclopedia articles (including the article images and facts) can be freely used under Attribution-ShareAlike license, unless stated otherwise. Cite this article:
Adela de Torrebiarte Facts for Kids. Kiddle Encyclopedia.