Kids Encyclopedia Facts
Not to be confused with Adventure Island (water park). 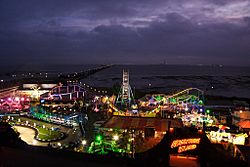 Adventure Island started out in 1918 as Sunken Gardens, a sea-side garden that in the 1920s installed a few children's rides. In 1976, the land to the west of the pier was purchased by the Miller family. They developed the amusement park on the site from the rudimentary original and the entire site was redeveloped extensively.

In 1995 the park was vastly expanded when the land to the east of the pier was purchased to form part of the park.

Complementing the park is Southend Pier, the longest pleasure pier in the world (built in 1830 as a wooden pier, rebuilt as a steel pier in 1889); it extends more than a mile (1,34 miles/2,16 km) toward the ocean. The pier train runs the entire length of the pier to the Lifeboat Museum. The park's mascot is called Snappy.

Adventure Island is not divided into specific areas but divides its rides into the following categories: Big Adventure (blue rides), Junior (green rides) and Mini (red rides). The park is separated into the East side of the pier and the West side of the pier.

The fifth roller coaster, Rage, opened in February 2007. It is one of the biggest investments the park has ever made. The ride cost in the region of £3 million and is located on the former Raging River Log Flume site. The Sky Drop and Vortex rides were relocated to new positions in the park to make way. The ride is about 75 feet (23 m) in height and has a 97 degree drop, a vertical lift hill, a vertical loop, a zero-g roll and tight turns. It was named Rage after a competition in the newspaper Southend Echo to decide a name for the ride. The slogan is "For Superheroes only!" which is said before the first drop of the roller coaster.

In 2014 Adventure Island demolished the Pirate Boat, which was one of their oldest attractions, to make way for Adventure Inside in spring 2015.

In September 2016 the park retained a top five status in the "Friendliest Park In The World" category at the annual Amusement Today Golden Ticket Awards.

In September 2020, Adventure Island temporarily closed, following advice from Essex Police after a traveller encampment was set up in the nearby Kursaal car park. In an update on the company's Facebook page, Adventure Island told visitors that they had been "advised to close early due to traveller invasion!" and that it was "best to be safe than sorry!". The language used in the post was criticised by Traveller Rights organisations as reinforcing negative stereotypes about Traveller communities. The post was later deleted, and the company apologised for any offence caused. 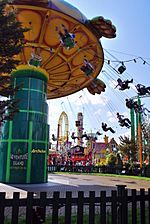 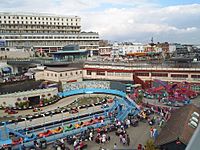 All content from Kiddle encyclopedia articles (including the article images and facts) can be freely used under Attribution-ShareAlike license, unless stated otherwise. Cite this article:
Adventure Island (amusement park) Facts for Kids. Kiddle Encyclopedia.