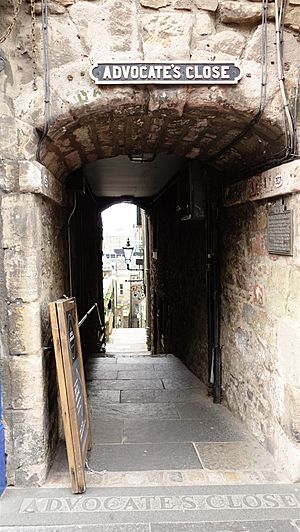 The entrance to Advocates Close

Advocates Close is a narrow and steep alley in Edinburgh of medieval origin, redeveloped in the early 21st century. With a multiplicity of steps it is not accessible to disabled persons.

The close leads from Market Street at the foot of Cockburn Street to the Royal Mile, exiting opposite St Giles Cathedral close to the Supreme Court of Scotland.

Viewing from the Royal Mile down the close it frames a classic and iconic view of the Scott Monument. 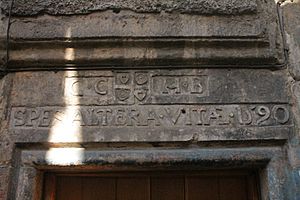 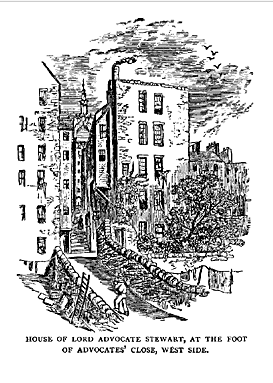 The street dates from at least the 15th century, and elements survive from at least the mid-16th century. At this time the street was a fashionable address, where the Scottish gentry and professionals would live with their family and servants. The name derives from the house of Sir James Stewart who was Lord Advocate of Scotland.

Adam Bothwell's house stands on the west side of the close and was originally accessed from Byers Close.

By the 19th century the Edinburgh gentry had abandoned the Old Town and moved to the New Town or suburbs. Streets such as Advocates Close passed to the lower classes and were split into tenements. In this form, given the huge density and dark, narrow streets, the area quickly became a slum. A major part of this stemmed from the lack of sewerage, with waste being thrown out of the window to run down the steep slope.

The main non-residential building in the 19th century was the Imperial Hotel, which stood at the lower end on the site of the Lord Advocate's house. This site was redeveloped several times: next as offices for the Edinburgh Evening News then as the main office for the Edinburgh Festival.

A number of 16th century buildings survive on the east side of the close. In the 1920s, as a result of slum clearance programmes, most of the buildings on the west side of the close were removed. This demolition retained various carved doorways but moved them together, where they now stand in a mutually impossible relationship for each to be used. The demolitions created a new view of the Scott Monument, which stands slightly off axis to the close.

The bronze plaque at the head of the close was added in 1935 by the City Architect, Ebenezer James MacRae.

The first renewal of interest in the street (other than as a viewpoint) was in 1993 when the newly created Old Town Conservation Committee chose to site their office in the oldest remaining building: at the head of the close on its east side. This involved a wholesale restoration of the building, revealing a large 16th century fireplace within and several painted ceilings. This block lost its top two floors in the slum clearance of the 1920s. A doorpiece slightly further down the close echoes the fireplace design.

All content from Kiddle encyclopedia articles (including the article images and facts) can be freely used under Attribution-ShareAlike license, unless stated otherwise. Cite this article:
Advocates Close Facts for Kids. Kiddle Encyclopedia.