Affeton Castle is a converted late-medieval gatehouse near East Worlington, Devon, England. It was formerly part of the destroyed fortified manor house of Affeton, situated on the side of a valley of the Little Dart River. Built in 1434, the surrounding house was destroyed in the English Civil War of the 1640s, and by the early 19th century the gatehouse was in ruins. It was restored between 1868-9 by Sir George Stucley, 1st Baronet for use as a shooting-box; in 1956, it was converted to form the private home of Sir Dennis Stucley, 5th Baronet. The castle, approximately 60 feet (18 m) by 22 feet (6.7 m) in size, is protected as a Grade II* listed building.

Originally Affeton Castle formed part of a large fortified manor house built from grey rubble stone by the Stucley family in about 1434. The Stucley family acquired the Affeton estate when Hugh Stucley, Sheriff of Devon in 1448, married the heiress Catherine de Affeton. It measures approximately 60 feet (18 m) by 22 feet (6.7 m). It formed a major part of the defences of the house, and incorporates a tall arch, now partly filled in to form a smaller front door, through which persons and vehicles passed to gain access to the inner courtyard. 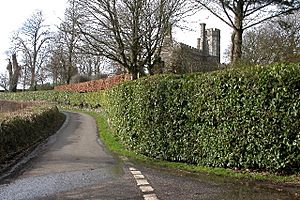 The 4th Baronet gave Affeton Castle to his son, Sir Dennis Stucley, 5th Baronet (1907–1983), in 1947. In 1956, Moreton Hall was sold off, and Affeton Castle became the main private residence of the Stucley baronets. Sir Dennis installed two bathrooms in the castle, where previously there were none. Sir Hugh Stucley, 6th Baronet (born 1945), lives in the castle in the 21st century, which is not open to the public, unlike the family's other larger residence at Hartland Abbey. He has added an extension housing a nursery wing and additional bedrooms.

All content from Kiddle encyclopedia articles (including the article images and facts) can be freely used under Attribution-ShareAlike license, unless stated otherwise. Cite this article:
Affeton Castle Facts for Kids. Kiddle Encyclopedia.