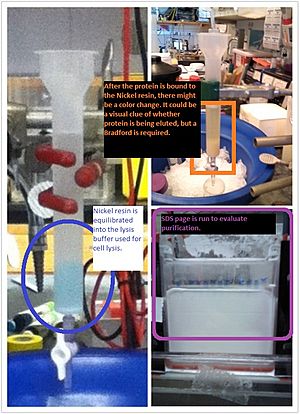 This laboratory technician has built an apparatus to perform affinity chromatography on a protein.

In some affinity chromatography, the binding buffer and elution buffer work by changing the pH of the solution. That means they make it more acidic or less acidic. Because most molecules from living things change shape depending on how much acid is nearby, the binding buffer and elution buffer can make the ligand and target molecule change shape to hold on tighter or let go of each other.

Affinity chromatography does not always work perfectly. Sometimes the scientists must purify the target molecule to make sure they did not accidentally collect other molecules too.

All content from Kiddle encyclopedia articles (including the article images and facts) can be freely used under Attribution-ShareAlike license, unless stated otherwise. Cite this article:
Affinity chromatography Facts for Kids. Kiddle Encyclopedia.