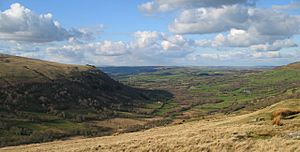 The Afon Senni is a river in Powys, Wales which rises in the Fforest Fawr section of the Brecon Beacons National Park and flows northwards for 11 kilometres (7 mi) to a confluence with the River Usk at Sennybridge.

The river name probably derives from a personal name 'Senni'.

The river is designated as a special area of conservation in respect of its population of three species of lamprey, twaite shad, European bullhead, Atlantic salmon and otter.

All content from Kiddle encyclopedia articles (including the article images and facts) can be freely used under Attribution-ShareAlike license, unless stated otherwise. Cite this article:
Afon Senni Facts for Kids. Kiddle Encyclopedia.