While the Africanis Society of Southern Africa has made the term of "Africanis" to include all African breeds of dog, there does exist numerous specialised types developed by various African ethnic groups with their own indigenous and ancient names. These types are not "landraces" as dictated by the Africanis Society, but rather unusual types developed for certain specific conditions and that do exhibit differences in one type from the other. 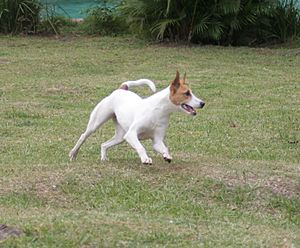 There is some evidence that dog domestication occurred in Europe or Siberia. The traditional African dog is a descendant of dogs that had been interbred with local wolves in the East and came to Africa. Their earliest presence has been established in Egypt and dated to 4700 BC. Archaeological records show that, from then on, the dog spread rapidly along the Nile into Sudan and even beyond.

The earliest evidence for the presence of a domestic dog in South Africa has been established by the remains that were found near the Botswana border and dated at AD 570. By AD 650 the presence of the house dog is established in the Lower Thukela valley. By AD 800 it is part of a Khoikhoi settlement in Cape St. Francis. 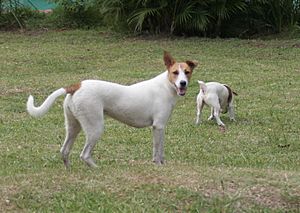 For hundreds of years this exclusive primitive canine gene pool adapted to various conditions of the Southern African landscape and, through natural selection, evolved into ecotypes all belonging to the same landrace.

The true Africanis is still found today in tribal areas where people maintain their traditional lifestyle. The fast-changing South Africa and the impact that this causes on rural societies, together with a certain disdain for the traditional dog and the status that the ownership of an exotic breed provides, poses an increasing threat to the continuation of the aboriginal Africanis. 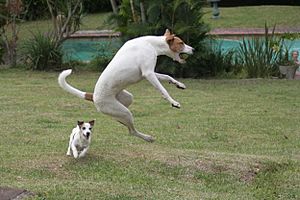 The Africanis is a short-coated, medium-sized dog, well-muscled and slightly longer than tall. It can be of any colour and occasionally comes with a ridgeback. There is also a wire-haired variety of the breed, but it is relatively rare. The height usually varies from 50 to 60 cm (with the tolerance of 2–3 cm).

The Africanis is well disposed without being obtrusive: a friendly dog showing watchful territorial behaviour. The breed is independent and territorial, but highly trainable. They can however, become grumpy as they grow older and may also become quite difficult when kept with other dogs in a pack. 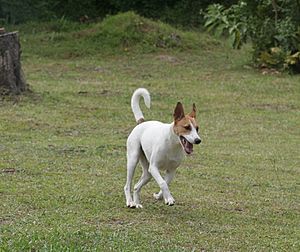 One view holds that it has over the years developed a natural resistance against internal and external parasites, although they do appear to be very susceptible to introduced diseases such as distemper and parvovirus and to ticks. Others suffer from cancer. Rabies is very prevalent among the indigenous dog populations of southern Africa. It is therefore essential to ensure that any indigenous African dog, including the Europeanised Africanis, be inoculated annually for all the usual contagious diseases and understood that they are as susceptible to other diseases as any other domesticated dog.

All content from Kiddle encyclopedia articles (including the article images and facts) can be freely used under Attribution-ShareAlike license, unless stated otherwise. Cite this article:
Africanis Facts for Kids. Kiddle Encyclopedia.