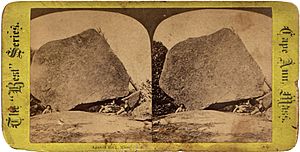 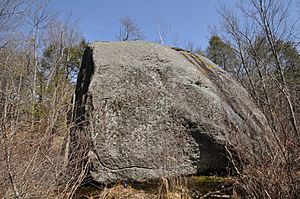 Agassiz Rock is a 116-acre (47 ha) park in Manchester-by-the-Sea, Massachusetts, owned and maintained by The Trustees of Reservations. The park's name is from two examples of large glacial erratic boulders plucked from bedrock. As glaciers scoured this landscape, the mass of bedrock forming the hill proved more resistant than the surrounding soil, forcing the bottom of the glacier up and over the hill. The north side was smoothed and the south side left steep and rugged as the glacier broke off chunks of rock as it passed.

Little Agassiz Rock is a granite monolith on one of the trails. It rests on a small jagged stone, leaving an opening below. A short distance away, other boulders lie perched on the edge of this glaciated upland. Below, in a small shrub swamp, rests thirty-foot-tall Big Agassiz Rock. Its depth is unknown.

The trail to the site is a one-mile loop that passes both Big and Little Agassiz rocks. Following long periods of rain the area surrounding Big Agassiz Rock often floods.

In 1874, a group of students named this site to honor Louis Agassiz, the Harvard University professor who first theorized that the rocks that dot New England's landscape were shaped and deposited by glaciers.

Agassiz visited the site and found the erratic physical features fit his hypothesis. Prior to Agassiz's hypothesis, people widely believed that the scattering of rocks throughout New England were the result of Noah's flood. The rock is often used as a type example of a glacial erratic.

All content from Kiddle encyclopedia articles (including the article images and facts) can be freely used under Attribution-ShareAlike license, unless stated otherwise. Cite this article:
Agassiz Rock Facts for Kids. Kiddle Encyclopedia.