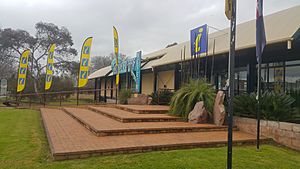 Front of the museum building in 2020 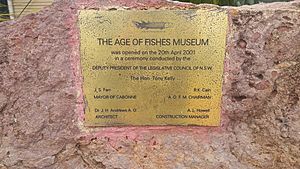 The Age of Fishes Museum is one of only two fish fossil museums in the world and is a National Heritage site due to its international scientific significance. Located in Canowindra, New South Wales, Australia, it was established in 1998. The Museum was designed by Australian architect, John Andrews. The museum houses a huge collection of Devonian fish fossils found in the Canowindra area.

In 1955, roadworks near Canowindra uncovered a large rock slab covered with unusual impressions, which was then placed to the side of the road whilst roadworks continued. A local apiarist later found this slab and, believing it to contain fossils, contacted the Australian Museum about it. In 1993 paleontologist Dr Alex Ritchie led a dig at the site of the initial fossil discovery. That dig led to the removal of 70 tonnes of rock slab and revealed over 3,000 fish fossils from the Devonian period. The dig site has led to several new discoveries and tells the story of events that occurred over 360 million years ago.

All content from Kiddle encyclopedia articles (including the article images and facts) can be freely used under Attribution-ShareAlike license, unless stated otherwise. Cite this article:
Age of Fishes Museum Facts for Kids. Kiddle Encyclopedia.