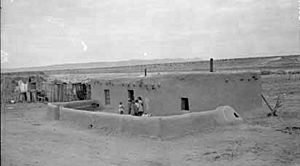 Agua Fria (Spanish for "cold water") is a census-designated place (CDP) in Santa Fe County, New Mexico, United States. It is part of the Santa Fe, New Mexico Metropolitan Statistical Area. The population was 2,800 at the 2010 census. Agua Fria Village is a "Traditional Historic Community" (THC) as designated by the Santa Fe Board of County Commissioners in 1995 and subsequent Santa Fe County Ordinance #1996-16, as allowed by State Statute (3-7-1.1 and 3-2-3 (C) NMSA 1978).

There were 721 households, out of which 41.9% had children under the age of 18 living with them, 47.2% were married couples living together, 14.7% had a female householder with no husband present, and 29.5% were non-families. 20.9% of all households were made up of individuals, and 5.0% had someone living alone who was 65 years of age or older. The average household size was 2.84 and the average family size was 3.29.

Native Americans lived in this area circa 3,000-3,500 BCE because of the water availability and moderate temperatures (about 30 less freezing days than in Santa Fe). Recent archaeological work shows a presence in this area back to 7,000 BCE.

The Spanish under command of Juan de Onate passed through this area on the way to founding the first capitol of New Mexico San Gabriel in 1598 (near present-day San Juan Pueblo - Okhay Owinge). The first recorded settlement was circa 1640 by the grandparents of Major Roque Madrid (the area then known as Pueblo Quemado for a burnt native town in the area). The grandfather Francisco de Madrid may have 'dropped off" from a 1603 expedition to farm this area (he is the namesake of Madrid, New Mexico, a mining area).

As these settlements of Cieneguitas, Agua Fria and Cieneguilla sprung up in Spanish Colonial New Mexico, they were called Ranchitos, as the population grew they became a Placita. Agua Fria was identified by two groups. The area by the Church was “La Placita de Los Romeros” and the other one in the area of the Tanque, the “watering hole” (area of Lopez Lane and Camino de Oro Road) became “La Placita de Los Lopez.” As the community grew, it acquired the status of a Village.

In the year, 1776 Fray Francisco Atanacio Dominguez gave a census count to his superiors listing Agua Fria with 57 families and 297 persons; but at this time it was still known as Pueblo Quemado.

U.S. Army Colonel John M. Washington’s Expedition to Navajo Country August 16, 1949 when he went through Agua Fria (Pages 46–47 Turmoil in New Mexico by William A. Keleher). This was the first known "American" reference to the community. The parroquia of Santa Fe was administered under the auspices of the Diocese of Durango, Mexico in the 1800s. Even though, the people here in Agua Fria had a strong faith, they found it difficult to attend church regularly, so they founded their own mission in the Village in 1835.

All content from Kiddle encyclopedia articles (including the article images and facts) can be freely used under Attribution-ShareAlike license, unless stated otherwise. Cite this article:
Agua Fria, New Mexico Facts for Kids. Kiddle Encyclopedia.