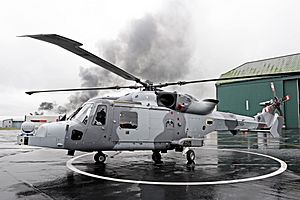 The AgustaWestland AW159 Wildcat is a modernized variant of the British helicopter Westland Lynx. Its first flight was in November 2009. It is built by AgustaWestland in Yeovil, Somerset. South Korea will in 2016 be the first foreign country to use the helicopter. In the UK it will be used by British Army and Royal Navy's Fleet Air Arm.

All content from Kiddle encyclopedia articles (including the article images and facts) can be freely used under Attribution-ShareAlike license, unless stated otherwise. Cite this article:
AgustaWestland AW159 Wildcat Facts for Kids. Kiddle Encyclopedia.