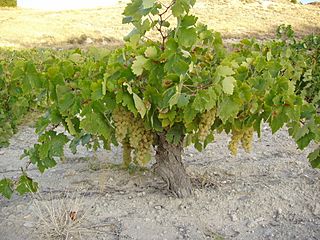 A 50-yr old Airén vine, from a vineyard near Carabaña (Madrid, Spain)

Airén is a variety of Vitis vinifera, a white grape commonly used in wine making. This grape is native to Spain where it represents about 30% of all grapes grown.

Since Airén tends to be planted at a low density, several other varieties (including Cabernet Sauvignon and Merlot) are more planted in terms of number of vines. Plantations of Airén are declining as it is being replaced in Spanish vineyards with various red varieties, such as Tempranillo. By 2015, plantings of Airén had declined to 218,000 hectares (540,000 acres).

The grapes have a cotton-like bud burst, which is bronze or yellowish in colour, with light reddish edge. The grapes have a trailing growing habit. The leaves of the Airén are average in size and have a pentagonal shape. The upper face of the leaf is yellowish green in color while the lower face is velvety.

The grape bunch is large in size and has an average compactness. It can grow in two different shapes: cylindrical or as a long cone. The grapes are large and spherical and have a yellowish color. The grapes are late to bud burst and also late to ripen. They yield about 4.5 to 6 kg per vine. Further, this grape is very resistant to drought.

All content from Kiddle encyclopedia articles (including the article images and facts) can be freely used under Attribution-ShareAlike license, unless stated otherwise. Cite this article:
Airén Facts for Kids. Kiddle Encyclopedia.