The Air Mobility Command Museum (AMCM) is dedicated to military airlift and air refueling aircraft and the men and women who flew and maintained them. It has the largest and most complete collection of fully restored U.S. military cargo and tanker aircraft in the Eastern United States and is located about 1/2 mile south of Dover Air Force Base. The mission of the museum is to collect, preserve and exhibit the artifacts and human stories significant to the development and employment of military airlift and air refueling in the USAF and the USAAF, as well as to portray the history of Dover Air Force Base.

While the museum itself was not officially established until 1986, the idea for the museum developed as a result of an Air Force Reserve restoration project on the B-17G bomber "Shoo Shoo Baby" in 1978. This aircraft became the first of many to be restored for eventual display at the museum, which was still in the early stages of conceptualization. Then in 1986, preparations were formally advanced for the creation of an air museum at Dover AFB. At the same time, the C-47A "Turf and Sport Special" also underwent restoration, having been rejected by many other museums as "beyond salvage." The then Dover AFB Historical Center was officially recognized by the U.S. Air Force in 1995, moved from three hangars in the main area of the base to its present location in Hangar 1301 in June 1996, and its name was changed to Air Mobility Command Museum in February 1997. Hangar 1301 is listed on the National Register of Historic Places for its significance as the site of the US Army Air Force's rocket test center, and was restored in the 1990s. The facility encloses over 20,000 square feet of aircraft display gallery plus 1,300 square feet of exhibit rooms. Additionally, an attached 6,400 square foot building houses a theater, museum store, exhibit workshop, and various offices. The surrounding 100,000 square feet of outdoor ramp space allows for a closer inspection of the remaining aircraft in the collection.

Dover Air Force Base was originally built as a civilian airport that was modified for military use as a result of Public Law 812, which funded local governments to build airports in response to the outbreak of hostilities in Europe and Asia in 1939-40. Ten days after the attack on Pearl Harbor on December 7, 1941, the War Department employed its emergency powers to lease Dover Municipal Airfield for the entirety of World War II. The air field would serve primarily as a base for anti-submarine operations, fighter pilot training, and aerial rocket testing and development. In September 1946, after the end of the war, Dover Army Airfield was placed in "inactive" status. Following the creation of the U.S. Air Force as a separate service entity, the Airfield became Dover Air Force Base on January 13, 1948. Beginning in 1952, the primary mission of DAFB focused on military airlift due to the strategic location of the base on the Eastern Seaboard, and the base was designated as a permanent U.S. Air Force installation on December 22, 1953. During the Military Air Transport Service's existence from 1948 to 1965, a number of aircraft were utilized, such as the C-46, C-47, C-54, C-74 Globemaster, C-97 Stratofreighter, C-118, C-121, C-124, C-130, C-131, C-133, KC-135, and the C-141. Many are on display at the AMCM. The Military Airlift Command was another major command of the United States Air Force from 1966 to 1992. During this time, the Air Force was involved in such conflicts as the Vietnam War, Cold War, Desert Shield and Desert Storm, as well as humanitarian efforts including Operation Provide Comfort and the relief of former USSR satellite nations following its dissolution. Many of the aircraft in the museum's collection are from this era. Air Mobility Command, the current major command, was established June 1, 1992, and has been in existence ever since. Several aircraft from this period are in the museum's collection, including the C-141, C-9, and the C-130. Operational aircraft such as the C-5M and the C-17A that launch from the active side of Dover Air Force Base are visible from the museum as well.

The Air Mobility Command Museum is home to a number of significant vintage aircraft from a variety of eras and major commands. Additionally, the AMC Museum houses a complete set of all significant Lockheed air lifters used by the Air Force and Army since World War II.

One of the last functional B-17s on display at the AMC Museum in Dover, Delaware.

One of the first C-9C Nightingale on display at the AMC Museum in Dover, Delaware.

The last of the 50 C-133s on display at the AMC Museum in Dover, Delaware.

The first C-141A Starlifter built; on display at the AMC Museum in Dover, Delaware.

Other exhibits and attractions 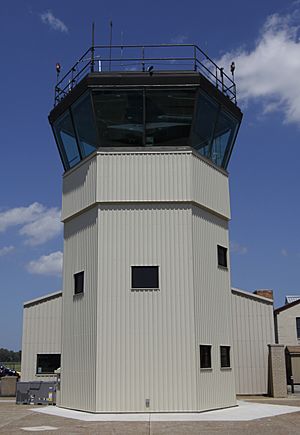 The exhibit air control tower on display at the Air Mobility Command Museum in Dover, Delaware. The tower stood about 103 feet tall when in operation, but currently stands 39 feet high at the museum.

In addition to the aircraft and non-aircraft collections, the museum has a few other notable attractions. These include a flight simulator, commemoration park outside the museum building, and the retired control tower cab, which served as Dover AFB's control tower from 1956 to 2009.

All content from Kiddle encyclopedia articles (including the article images and facts) can be freely used under Attribution-ShareAlike license, unless stated otherwise. Cite this article:
Air Mobility Command Museum Facts for Kids. Kiddle Encyclopedia.