Ají dulce, ají cachucha, quechucha, ajicito, or ají gustoso is any of a variety of sweet perennial peppers found in Latin America and the Caribbean. It is most widely known in Cuba, Jamaica, Puerto Rico, Dominican Republic and Venezuela, where it refers to a specific native variety of Capsicum chinense that is related to the habanero but with a much milder, smoky flavor. In the English-speaking Caribbean, it is known as seasoning pepper and is essential to a variety of traditional dishes.

In Venezuelan cuisine, ají dulce is a key ingredient in many traditional dishes, like the national dish pabellón criollo. The Venezuelan ají dulce is classified as non pungent, between 100 and 500 in the Scoville scale.

In Puerto Rico where it is called ají dulce or ajicito, it is grown commercially and used for sauces, such as recaíto, sofrito, and mojito isleño, other fish or meat sauces, as well as stews, rice, and other local dishes. 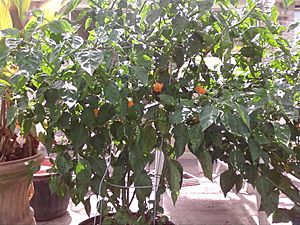 All content from Kiddle encyclopedia articles (including the article images and facts) can be freely used under Attribution-ShareAlike license, unless stated otherwise. Cite this article:
Ají dulce Facts for Kids. Kiddle Encyclopedia.