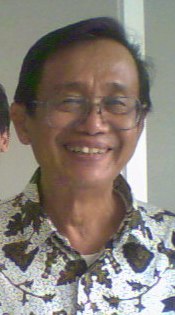 Rosidi worked to preserve Sundanese culture as well as other cultures of Indonesia. He founded and led the research project and folklore Pantun Sundanese (PPP-FS), during the period 1970 to 1973.

All content from Kiddle encyclopedia articles (including the article images and facts) can be freely used under Attribution-ShareAlike license, unless stated otherwise. Cite this article:
Ajip Rosidi Facts for Kids. Kiddle Encyclopedia.