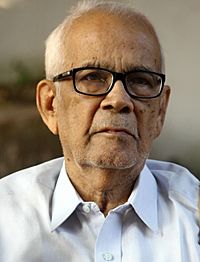 Akkitham Achuthan Namboothiri (18 March 1926 – 15 October 2020), popularly known as Akkitham, was an Indian poet and essayist. Many of his works were in the Malayalam language. He was born near Kumaranellur, Palakkad.

Akkitham was the 2019 recipient of India’s highest literary honour, the Jnanpith Award, and several other awards including Padma Shri.

Namboothiri died at a private hospital on 15 October 2020 in Thrissur, aged 94.

All content from Kiddle encyclopedia articles (including the article images and facts) can be freely used under Attribution-ShareAlike license, unless stated otherwise. Cite this article:
Akkitham Achuthan Namboothiri Facts for Kids. Kiddle Encyclopedia.