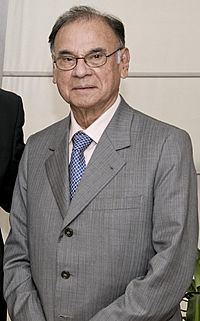 Alí Rodríguez Araque (9 September 1937 – 19 November 2018) was a Venezuelan politician, lawyer, and diplomat. He was born in Ejido, Mérida, Venezuela.

He was the leader of the party Patria Para Todos. He worked under the Hugo Chávez administration, such as oil advisor, General Secretary of OPEC, President of Petróleos de Venezuela (PDVSA), Minister of External Relations and Ambassador to Cuba. He was appointed as Minister of Finance in June 2008. His last occupation was Ambassador of Venezuela from 2014 until his death in 2018.

Rodríguez Araque died on 19 November 2018 in Havana, Cuba from a heart attack at the age of 81.

All content from Kiddle encyclopedia articles (including the article images and facts) can be freely used under Attribution-ShareAlike license, unless stated otherwise. Cite this article:
Alí Rodríguez Araque Facts for Kids. Kiddle Encyclopedia.