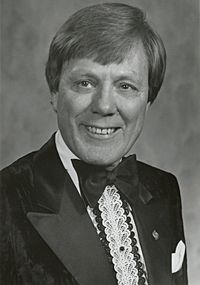 Alfred Geoffrey "Al" Wright (June 23, 1916 – September 5, 2020) was an American bandleader and conductor. He was the Director of Bands Emeritus at Purdue University and Chairman of the Board of the John Philip Sousa Foundation. He was born in London, but his family moved to the United States in the 1920s.

Wright became director of the Purdue All-American Marching Band (AAMB) in 1954, becoming only the second person to hold the position, and served for 27 years until his retirement in 1981. 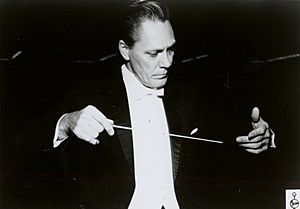 All content from Kiddle encyclopedia articles (including the article images and facts) can be freely used under Attribution-ShareAlike license, unless stated otherwise. Cite this article:
Al G. Wright Facts for Kids. Kiddle Encyclopedia.