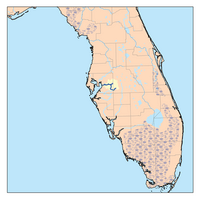 The Alafia River is 25 miles (40 km) long, with a watershed of 335 square miles (870 km2) in Hillsborough County, Florida, United States, flowing into Tampa Bay. The watershed contains ten named lakes and ponds, and 29 named rivers, streams and canals. During the rainy season, excess water is pumped to the new C.W. Bill Young Regional Reservoir, which opened in 2005.

For centuries the Alafia was home to the Tocobaga Indians. From their settlement at the mouth of the river to their hunting camps upstream, the Indians left traces of their lives and activities.

In the sixteenth century, the expeditions of Pánfilo de Narváez and Hernando de Soto explored the coastal areas of Tampa Bay and visited the Indians, making the first written account and charting the first maps of the Alafia River. On an early map the name 'Alafia' does not appear, but rather the translation, Hunting River. The 'Alafia' is a native word meaning "River of Fire." This is due to the strong red/brown color caused by tiny algae spores in the water.

Part of the river exists within the confines of the Alafia River State Park. The river is known to experience moderate to high level flooding around twice per year, causing most nearby homes to be built on stilts.

All content from Kiddle encyclopedia articles (including the article images and facts) can be freely used under Attribution-ShareAlike license, unless stated otherwise. Cite this article:
Alafia River Facts for Kids. Kiddle Encyclopedia.