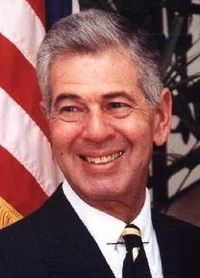 Alan John Blinken (born 1937) is an American businessman and politician. He was the U.S. Ambassador to Belgium from 1993 to 1997 during the Bill Clinton presidency. He was born in New York City.

He is the brother of U.S. Ambassador Donald M. Blinken and the uncle of United States Secretary of State Antony Blinken.

All content from Kiddle encyclopedia articles (including the article images and facts) can be freely used under Attribution-ShareAlike license, unless stated otherwise. Cite this article:
Alan Blinken Facts for Kids. Kiddle Encyclopedia.