His work stimulated a revival of astrology in the Western world after its decline at the end of the 17th century. Leo was a devout theosophist and he worked many of its religious concepts such as karma and reincarnation into his astrology. He used the Theosophical Society's vast international connections to publish, translate and disseminate his work across Europe and America. 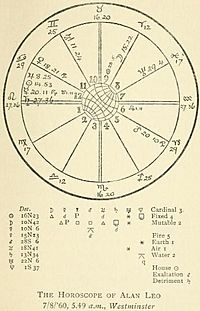 Leo, who took the name of his sun-sign as a pseudonym, is credited with starting the movement towards a more psychologically-oriented horoscope analysis in astrology, being the first astrologer to argue for a loose interpretation of possible trends of experience rather than the specific prediction of events. His influence has been described as marking a 'turning point' in horoscope delineation, because, as astrological historian James Holden explains:

Thereafter, what has been more recently called "event-oriented" astrology gradually receded in favor of character analysis and vague descriptions of possible areas of psychological harmony or stress.

In 1890, Leo, invited George R.S. Mead to found an occult lodge in Brixton, South London. Towards the end of his life, in 1909, and again in 1911, Leo travelled with his wife to India where he studied Indian astrology. As a result of his studies in India, he later attempted to incorporate portions of Indian astrology into the western astrological model.

Leo's book The Art of Synthesis (1912) was a probable influence on Gustav Holst's work The Planets. In this book, Leo gave the planets descriptions such as "Mars the Energiser".

In 1915 Leo founded the Astrological Lodge of London.

All content from Kiddle encyclopedia articles (including the article images and facts) can be freely used under Attribution-ShareAlike license, unless stated otherwise. Cite this article:
Alan Leo Facts for Kids. Kiddle Encyclopedia.