Alan Fred Titchmarsh, MBE, DL, HonFSE (born 2 May 1949) is an English gardener, broadcaster, TV presenter, poet, and novelist. After working as a professional gardener and a gardening journalist, he established himself as a media personality through appearances on gardening programmes. He has developed a diverse writing and broadcasting career.

Titchmarsh was born on 2 May 1949 in Ilkley, West Riding of Yorkshire, England. He is the son of Bessie (née Hardisty), a textile mill worker, and Alan Fred Titchmarsh, Sr., a plumber. In 1964, after leaving school at 15, Titchmarsh went to work as an apprentice gardener with Ilkley Council, before leaving in 1968, at 18, for Shipley Art and Technology Institute in Shipley in the West Riding of Yorkshire to study for a City and Guilds in horticulture.

Titchmarsh went on to study at Hertfordshire College of Agriculture and Horticulture for the National Certificate in Horticulture, before finally moving to the Royal Botanic Gardens, Kew to study for a Diploma in Horticulture. After graduating he stayed on at Kew, employed as a supervisor and later as a staff trainer. He left to pursue a career in gardening journalism in 1974. 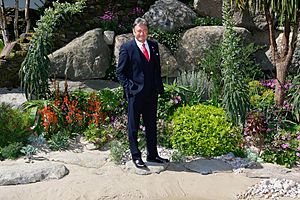 Titchmarsh at the Chelsea Flower Show 2014

Titchmarsh's first few television appearances were on the long-running BBC television show Nationwide as a horticulture expert. This led to his being invited to present coverage of the Chelsea Flower Show for BBC television in 1983. Titchmarsh hosted this every year until 2013. In 2014, he was replaced by Sophie Raworth. He also appeared on other BBC shows, such as Breakfast Time and Open Air as either a guest presenter or as a gardening expert, providing commentary and answering viewers' questions.

In 1991, Titchmarsh was brought in to host the long-running BBC television talk show Pebble Mill, which he did until its cancellation in 1996. In 1991, he presented a 6-part series in which he followed in the footsteps of the pilgrims, travelling around Britain and Ireland in the process.

In 1996 the cancellation of Pebble Mill gave Titchmarsh the opportunity to move back towards gardening programmes, and he took over as host of another long-running BBC series, Gardeners' World in the same year, the show being filmed in his own garden. In 1997, he took gardening to the masses with BBC One television series, Ground Force, in which he and fellow presenters Charlie Dimmock and Tommy Walsh would perform a makeover on a garden, Titchmarsh making full use of his horticultural skills when restocking the lucky gardens featured. The show has travelled as far as the United States and South Africa, where one episode saw the Ground Force team make over Nelson Mandela's garden. 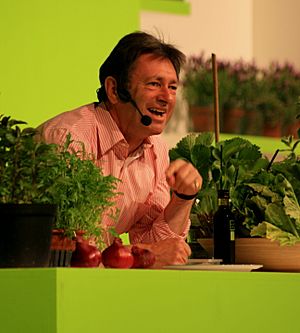 Titchmarsh at the 2008 Gardeners' World Live Exhibition in the NEC.

Staying involved in gardening programmes after Gardeners' World, Titchmarsh has presented two series of How To Be A Gardener

Away from gardening, Titchmarsh has had spells presenting Songs of Praise and a series of programmes on BBC Radio 2 in which he played a selection of light classical music, as well as a BBC nature documentary series, British Isles - A Natural History. In recent years, he has done less television and radio and spent more time on his career as a novelist and renewed interest in writing gardening books.

Titchmarsh has appeared in an advertisement for the Yorkshire Tourist Board (now Welcome To Yorkshire) as part as of a series which included contributions from other Yorkshire-born celebrities including Brian Blessed, Melanie Brown, Darren Gough and Brian Turner. He occasionally does other voiceover work for advertisements as well as voicing the title character in Gordon the Garden Gnome, a cartoon series for the CBeebies channel. In autumn 2007, Titchmarsh hosted a follow-up series to British Isles – A Natural History entitled The Nature of Britain focusing on British plant and animal species.

Other recent work included hosting a 2005 special edition of the Antiques Roadshow, entitled the 20th Century Roadshow, which focused on modern collectibles, performing in the 2006 Children's Party at the Palace for the Queen's 80th birthday, and guest hosting an episode of The Paul O'Grady Show while O'Grady was off for medical reasons.

In 2007 Titchmarsh hosted The Great British Village Show, in which gardeners and cooks from all over Britain competed to be the best at growing pumpkins, runner beans and tomatoes, and at knitting, baking cakes and making jam. In September 2007 Titchmarsh began presenting his afternoon ITV chat show The Alan Titchmarsh Show which aired in the 3.00 pm afternoon slot. The show ended in November 2014.

In 2010 Titchmarsh presented the first series of Popstar to Operastar with Myleene Klass. Since 2011, he has presented gardening show Love Your Garden.

On 1 June 2012 he presented Elizabeth: Queen, Wife, Mother on ITV and was criticised the following day, for his obsequiousness, in a review by Sam Wollaston for The Guardian.

In 2013, Titchmarsh, then aged 64, responded to complaints that older women were discriminated against on television by stating he would like to hear less "whingeing". "They don't complain in their early days when they are disporting themselves on sports cars", he stated in an interview with The Observer. This drew criticism from media figures who had been protesting against the difficulties faced by older women in the media, including from Miriam O'Reilly, winner of an age discrimination case against the BBC.

In spring 2013 Titchmarsh was a reporter on BBC Two programme The Great British Winter. In December 2014 Titchmarsh presented a two-part series for ITV called The Queen's Garden that was filmed over a time period of one year.

In February 2017, the Channel Five programme Secrets of the National Trust started airing with Alan Titchmarsh as the main presenter alongside other well known celebrities.

In 1988 Titchmarsh was offered a slot on BBC Radio 2 hosting a gardening show with Gloria Hunniford called House in a Garden.

In January 2006, Titchmarsh was given a permanent slot on BBC Radio 2 on Sunday evenings with the show "Melodies for you" consisting of light classical and popular music, following the traditional style of Sunday-night broadcasting on Radio 2. In August 2011, Titchmarsh left Radio 2. Since January 2012, he has hosted a Saturday morning show on Classic FM.

Titchmarsh began writing fiction, and his first novel, Only Dad, was published in November 2001. A further six books have since been published. Running parallel to the fiction work, Titchmarsh published a new series of gardening guides, the How to Garden series, in April 2009. His second autobiographical work is Nobbut A Lad: A Yorkshire Childhood from October 2006, a follow-up to his first autobiography, Trowel & Error, published in 2002. When I Was A Nipper was published on 30 September 2010. 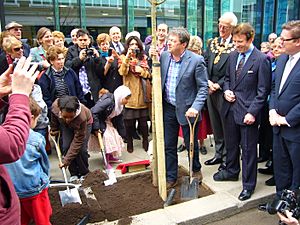 In addition to his extensive television and writing work, Titchmarsh was also trustee of a charity, 'Gardens for Schools', and others, including 'Seeds for Africa'. Gardens for Schools helped fund gardens and green spaces in and around schools, while Seeds for Africa encourages sustainable vegetable gardening. It provides community groups with the tools, seeds and training they need to start their own vegetable gardens including providing water installation and preparing the land. Gardens for Schools has since been merged with the RHS Campaign for School Gardening. Away from horticulture, Titchmarsh is involved with the Cowes Inshore Lifeboat, where he is a patron, and with the National Maritime Museum, where he is a trustee.

In 2004, Titchmarsh became the president of Perennial, officially known as the Gardeners' Royal Benevolent Society. Perennial is one of the UK's oldest charities and was created in 1839 to help gardeners and horticulturists facing times of difficulty.

Titchmarsh has a wax statue at Madame Tussaud's.

In August 2014, Titchmarsh was one of 200 public figures who were signatories to a letter to The Guardian expressing their hope that Scotland would vote to remain part of the United Kingdom in September's referendum on that issue.

Titchmarsh is an occasional practitioner of church bellringing. In 2011, he rang a quarter peal in Holybourne, Hampshire, to celebrate the marriage of William and Kate.

Titchmarsh moved to his home, a grade II listed Georgian farmhouse in Hampshire, in 2002. He also has a coastal home, near Cowes on the Isle of Wight, where he spends about a third of the year.

Titchmarsh was appointed a Member of the Order of the British Empire (MBE) in the 2000 New Year Honours for services to horticulture and broadcasting. He was made a Deputy Lieutenant (DL) of the County of Hampshire in 2001. In 2008, Titchmarsh served as High Sheriff of the Isle of Wight.

In 1999, Titchmarsh was awarded an honorary Doctor of Science (DSc) degree by the University of Bradford. He was made Patron at Writtle College, a university college in Essex, in 2001 and had a building named after him at the college in 2011 (the 'Titchmarsh Centre for Animal Studies'). In 2004, he was awarded the Royal Horticultural Society's Victoria Medal of Honour, the highest award the RHS can bestow. In 2007, he was awarded an honorary degree by the University of Winchester, and in 2014 was designated as the Chancellor of the university. He was honoured by the City of Westminster at a tree planting and plaque ceremony in April 2011.

Titchmarsh has capitalised on his strong brand with retail and merchandise projects. He has launched several of his own product lines, including his own range of "Alan Titchmarsh" gardening tools developed in conjunction with tool manufacturer Bulldog Tools. Titchmarsh has also teamed up with Digitalis Media to launch Gardeners' Heaven, the online retail arm of his website. Gardeners' Heaven supplies Titchmarsh's own tools as well as other popular gardening products.

Titchmarsh played the Pope in Sister Act The Musical at The Minack Theatre, Porthcurno, Cornwall in the BROS Theatre Company Production on 29 May 2019. He appeared in the final act of the show.

All content from Kiddle encyclopedia articles (including the article images and facts) can be freely used under Attribution-ShareAlike license, unless stated otherwise. Cite this article:
Alan Titchmarsh Facts for Kids. Kiddle Encyclopedia.