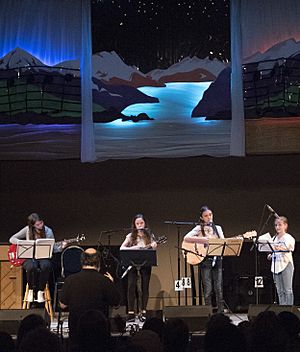 A performance during the 2016 edition of the festival, featuring a group composed of middle school students from Douglas.

The Alaska Folk Festival is an annual celebration of the music of Alaska, the Northwestern United States, and Canada, established in 1974. It is organised by The Alaska Folk Festival Inc., which is a non-profit membership organisation dedicated to the encouragement, support, and perpetuation of music in Alaska. The festival is held in Juneau, Alaska, most commonly in April, and lasts for a week. Its functioning is supported solely by volunteers and donations.

The festival is a celebration of music by folks. Folk music is an important component, but all types of music are encouraged. Some acts include dance and poetry. There are limits imposed due to the short length of sets. Limits include no overly long setup times, and no use of recorded music.

The Festival has performances from a variety of solo artists and musical groups, and it provides workshops for people interested in the music. There are also dances, jams, singer/songwriter showcases, and other events. All events are free to the public, with no auditions for the acts, but they must apply in time.

The only limitation on musical style is the 15 minutes allocated for each act. Performers are not paid, with the exception of one guest artist who is selected annually to perform for two 45 minute sets and do workshops. There are 9 concerts over a week, with about 15 acts at each concert.

2020 saw the COVID-19 pandemic as cause to scrap the festival.

All content from Kiddle encyclopedia articles (including the article images and facts) can be freely used under Attribution-ShareAlike license, unless stated otherwise. Cite this article:
Alaska Folk Festival Facts for Kids. Kiddle Encyclopedia.