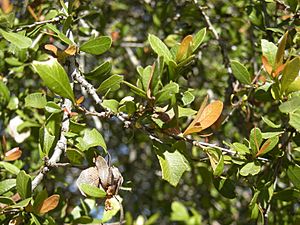 Alectryon diversifolius grows as a shrub up to 4 m high, with simple leaves often clustered on short branchlets. Leaf shape is highly variable even on individual plants, ranging from oval to lanceolate to strongly serrated and holly-like.

The species occurs in central and south-eastern Qld and north-eastern N.S.W. Usually growing in Brigalow scrub in dark clay.

It was first described by Ferdinand von Mueller in 1858 as Heterodendrum diversifolius, but was moved to the genus, Alectryon by Sally T. Reynolds in 1987.

All content from Kiddle encyclopedia articles (including the article images and facts) can be freely used under Attribution-ShareAlike license, unless stated otherwise. Cite this article:
Alectryon diversifolius Facts for Kids. Kiddle Encyclopedia.