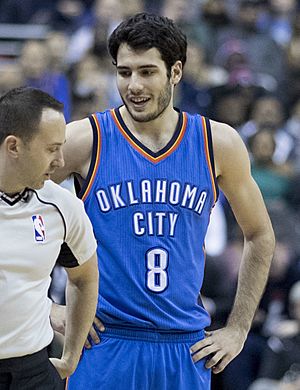 He started playing in LEB Oro with Clínicas Rincón, the branch of Unicaja. In the summer of 2011 Abrines was selected to the Spanish selection of Basketball U-18 for play the European Championship, where he was elected MVP.

And later was selected to play the all-star at European level. In October 2011 Alejandro Abrines debuted VS Gran Canaria in the ACB. He later did the same in the Basketball Euroleague. In February 2012 he debuted in La Copa del Rey.

All content from Kiddle encyclopedia articles (including the article images and facts) can be freely used under Attribution-ShareAlike license, unless stated otherwise. Cite this article:
Alejandro Abrines Redondo Facts for Kids. Kiddle Encyclopedia.