Alejandro Alcondez (born August 3, 1970) is a Mexican/American actor, screenwriter, film producer and film director. Born in Jalisco, Mexico, Alcondez moved to Hollywood, California in the early 1990s. His acting career began in theater production plays, he then moved on to produce and write his own Mexican films Impacto de Muerte, Furia Salvaje and El Bronko Negro, which were distributed by his company Producciones Alejandro Alcondez.

His most recent American film "Cielito Lindo" Beautiful Heaven (produced, written and directed by Alejandro Alcondez) was written especially for Alcondez where he plays the lead role of Pablo Pastor. This film was released by his own production and distribution company Alejandro Alcondez Pictures 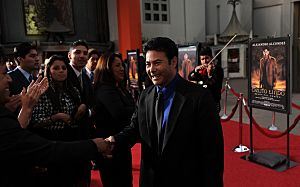 Alejandro Alcondez decided that he was ready for Hollywood and founded his American production company, Alejandro Alcondez Pictures, which produces English and Spanish movies for worldwide distribution. He produced his first English-speaking film entitled Cielito Lindo (Beautiful Heaven) in 2007. Alcondez visited many locations and decided to begin film production in Chihuahua, Chihuahua, Mexico. The film premiered at Grauman's Chinese Theatre on May 27, 2010 Alejandro Alcondez not only wrote the script, produced the film, he also directed and starred as a lead actor alongside Adam Rodríguez, Nestor Serrano, Nicole Paggi, Ilia Volok, and Pato Hoffmann, among others.

During his early career, Alcondez participated in various theater productions as an actor, director, writer and producer, gaining valuable experience in screenwriting and filmmaking

Alcondez has been part of many other projects including screen writing, producing and directing many music videos and various feature films like. Cielito Lindo (Beautiful Heaven) filmed at Chihuahua, Mexico. In an interview in a Mexican newspaper, Alcondez explained the reason he chose to film at that location as well the plot of the film and when he wrote the Screenplay for "Cielito Lindo" (Beautiful Heaven). as well as the number of films he has participated.

All content from Kiddle encyclopedia articles (including the article images and facts) can be freely used under Attribution-ShareAlike license, unless stated otherwise. Cite this article:
Alejandro Alcondez Facts for Kids. Kiddle Encyclopedia.