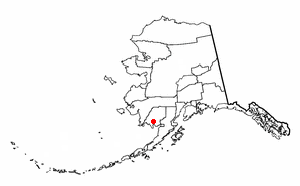 Aleknagik is a Yupik word meaning "wrong way home". Yupiks returning to their homes along the Nushagak River would sometimes become lost in the fog and be swept up the Wood River to Aleknagik Lake by the tide.

All content from Kiddle encyclopedia articles (including the article images and facts) can be freely used under Attribution-ShareAlike license, unless stated otherwise. Cite this article:
Aleknagik Lake Facts for Kids. Kiddle Encyclopedia.