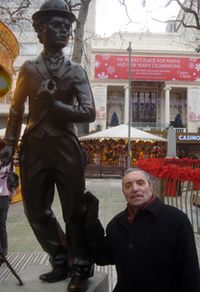 Aleksandr Vitalievich Gordon (26 December 1931 – 7 December 2020) was a Russian actor and movie director. He was born in Moscow. His career began in 1956. His best known role as George in The Killers (1956). He directed and wrote the 1957 student movie There Will Be No Leave Today.

Gordon died on 7 December 2020 in Moscow, just a few weeks before his 89th birthday.

All content from Kiddle encyclopedia articles (including the article images and facts) can be freely used under Attribution-ShareAlike license, unless stated otherwise. Cite this article:
Aleksandr Gordon Facts for Kids. Kiddle Encyclopedia.