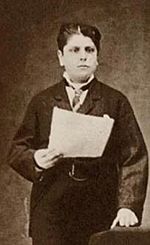 Alessandro Moreschi (11 November 1858 – 21 April 1922) was a castrato singer of the late 19th century and the only castrato to make solo recordings. 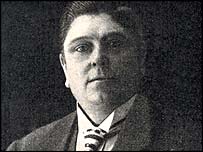 Many years later Fred Gaisburg remembered making these historic first recordings in the Vatican: "Selecting a great salon with walls covered with Titians, Raphaels, and Tintorettos, we mounted our grimy machine right in the middle of the floor."

The second set of recordings was made in Rome in April 1904.

Alessandro was a member of the Sistine choir until Easter 1913. He then retired and got a pension after thirty years' service.

In retirement, Moreschi lived in his apartment, a few minutes' walk from the Vatican. He died there at sixty-three, possibly of pneumonia. His funeral mass was a large and public affair in the church of San Lorenzo in Damaso.

All content from Kiddle encyclopedia articles (including the article images and facts) can be freely used under Attribution-ShareAlike license, unless stated otherwise. Cite this article:
Alessandro Moreschi Facts for Kids. Kiddle Encyclopedia.