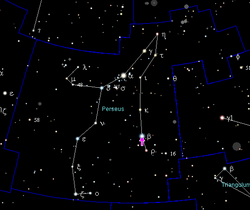 This is Algol in the sky

English: Algol (β Persei) is a triple-star system (Algol A, B, and C) in the constellation Perseus. The large and bright primary Algol A is regularly eclipsed by the dimmer Algol B every 2.87 days. The pair is separated by only 0.062 astronomical units (AU) from each other, so close that Algol A is slowly stripping off Algol B's outer layers.

Algol, also known as the Demon Star, is a bright star in the Perseus constellation. It is one of the best known double stars that can only be seen in spectroscopes, the first star of its type discovered, and one of the first variable stars to be discovered before it explodes. Algol is made of three stars (Beta Persei A, B and C) and the brightest is Persei A. These stars partly eclipse each other every 2 days, 20 hours and 49 minutes for 10 hours.

All content from Kiddle encyclopedia articles (including the article images and facts) can be freely used under Attribution-ShareAlike license, unless stated otherwise. Cite this article:
Algol Facts for Kids. Kiddle Encyclopedia.