Alice Louise Reynolds (April 1, 1873 – December 5, 1938) was the first woman professor at Brigham Young University (BYU). BYU magazine put her in a list of the 10 best BYU professors of the 20th century. She was the second woman in Utah to be a full professor.

Alice was born in Salt Lake City, Utah Territory, United States. Her father was George Reynolds and her mother was Mary Ann Tuddenham. Her father was a general authority of The Church of Jesus Christ of Latter-day Saints (LDS Church), and worked as secretary to the First Presidency of the church for many years. When Alice was six years old, her father went to jail because he had more than one wife (plural marriage).

Her father's sister, her aunt Julia Reynolds, helped raise Alice. Alice liked reading and being around grownups. When she was 12, her mother died while giving birth to one of her siblings. Alice's father sent her and her younger sister Florence to the Brigham Young Academy (BYA) for their high school education. Alice was inspired by one of her teachers, Academy Principal Karl G. Maeser. She graduated from BYA in 1890.

Alice had taught for two years when the president of BYA, Benjamin Cluff, asked her to start a literature department at BYA. Reynolds went to the University of Michigan to study literature from 1892 to 1894. When she came back she became a full-time teacher at BYA. 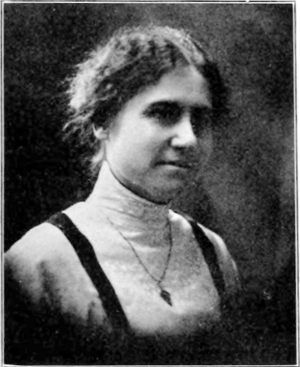 Reynolds was a Professor of English for 44 years. She became the first female to be a full professor at BYU. She taught approximately 5,000 students in 20 different English courses. Reynolds's absent-mindedness was famous at BYU. According to her students, she once walked through a herd of cows while reading a book and brought a teakettle to work instead of her purse.

While working at BYA, Reynolds became the chairperson of the committee to establish the library. She was the chairperson of the committee for 19 years. She held a large fundraiser to obtain 1,200 books to add to the school's library. Over the course of her life, she organized several other campaigns to help the library grow to 100,000 volumes. Through the efforts of the club, over 10,000 volumes were donated to the BYU library.

All content from Kiddle encyclopedia articles (including the article images and facts) can be freely used under Attribution-ShareAlike license, unless stated otherwise. Cite this article:
Alice Reynolds Facts for Kids. Kiddle Encyclopedia.