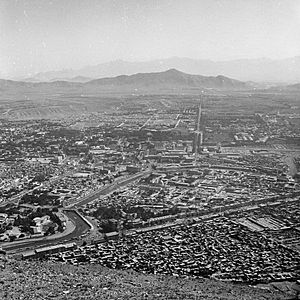 Alissa Johannsen Rubin is an American journalist who writes about war. She is of Jewish descent. She is the bureau chief for The New York Times in Paris. In 2016 she received a Pulitzer Prize for her stories about women in Afghanistan.

Rubin worked for The Congressional Quarterly, The Wichita Eagle, and The American Lawyer magazine.

In 1997, Rubin went to work at The Los Angeles Times, where she wrote about Iraq, Afghanistan and the Balkans.

In 2007 she went to work for the The New York Times, where she wrote about Iraq and France. She worked in the Baghdad bureau as a journalist, and then she became chief. In 2009, she became chief of the bureau in Kabul, Afghanistan.

All content from Kiddle encyclopedia articles (including the article images and facts) can be freely used under Attribution-ShareAlike license, unless stated otherwise. Cite this article:
Alissa Rubin Facts for Kids. Kiddle Encyclopedia.